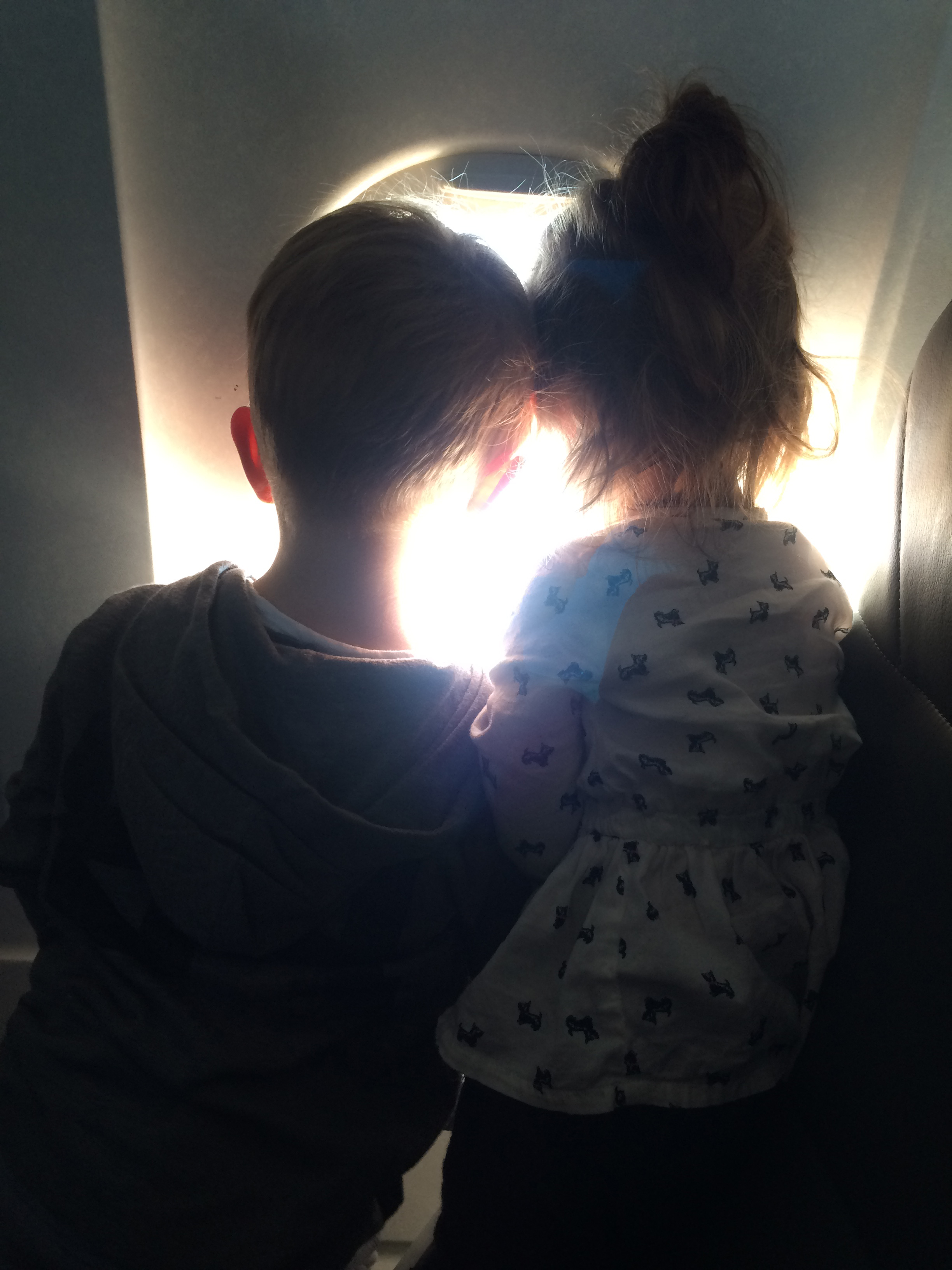 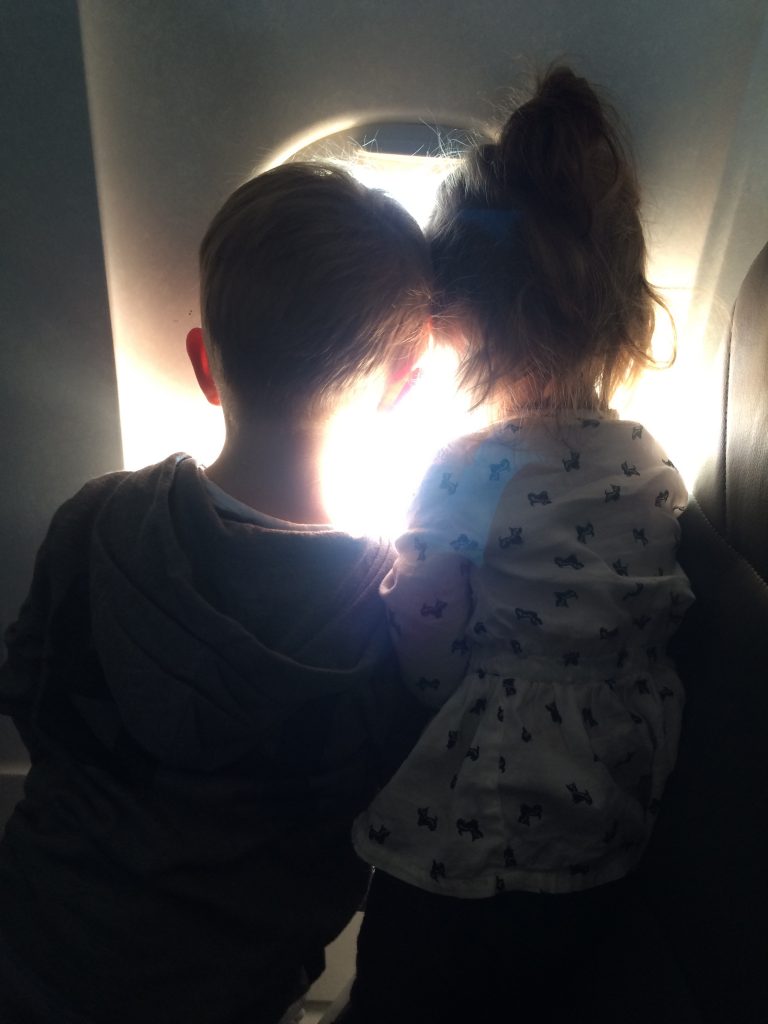 Flying with toddlers isn’t enjoyable for anyone. And I think it’s actually far worse for the parents because they’re the ones trying to keep their little ones calm and from throwing a tantrum in a 12×12 seat. While everyone else is enjoying a good read or a movie on their computer, I’m getting bitch slapped by my almost two year old and getting head butted while trying to keep her still. Instead of just first class ticket holders getting free alcoholic beverages, I think anyone traveling with a child should get one too.

And on top of the screaming child who’s poor ears are killing them from changing altitude, they don’t understand why they have to sit still. Kids aren’t meant to be still! And then the man next to you whips out a bag of candy and all hell breaks loose. You’ve already given your kids 4 packs of fruit snacks each in a last attempt to keep them quiet, and now this guy has to enjoy his delicious candy shelled chocolate morsels in front of my kid? Thanks a lot, guy.

I used to enjoy flying. It was quick, easy, and relaxing. And while it’s still quick, it’s no longer easy and relaxing. But when you have no other choice than to drive 14 + hours in a short weekend, you have to do it. But no one else around you cares. They’re just thinking to themselves “kids shouldn’t be allowed to fly”. Don’t say you’ve never had that thought, because before kids I certainly did. No one wants to be near the screaming baby or seat-back-kicking-toddler. But sometimes we don’t have a choice. Just like if my baby needs to nurse while I’m at a restaurant or my kid needs to use the bathroom when the seatbelt sign is on, I’m doing it.

I’ve seen people make bags for nearby passengers that include ear plugs, snacks, mini beverages, whatever. But kids are kids. And I’m not going to apologize for that. Because anyone that has kids, has had kids, or has family or friends with kids should be compassionate enough to know that some behaviors can’t be controlled. No matter how well behaved kids are, they’re still kids. A toddler in a terrible twos stage is still a two year old. She’s independent, defiant, and always moving. I can’t explain to her or reason with her that she needs to sit still for 2 hours because we’re on a plane. She sees a “papairplane” up in the sky and says “weeeeeeee”. She doesn’t understand there are rules and federal regulations. So I’ll try my best to keep her seated on my lap while the fasten seat belt sign is illuminated and to keep her snacks in the bag instead of the floor, but I can’t make any promises.

Yes, I’m flying with kids. No, I don’t need your dirty looks. I can do without those, thank you very much. Please don’t judge me as a mother because my kids don’t want to sit in silence. They’re kids. This flight falls during their nap time and I’m sorry that there’s not a darn thing in the world I can do about this situation. Laugh with me when I look at you, shrug my shoulders and throw my hands up in defeat. Whisper “it’s okay, they’re just kids” when I look like I’m going to cry because I can’t keep them quiet. Offer to buy me a beer (just kidding… maybe…). But be compassionate. Throw some headphones on, watch a movie, read a book, and enjoy your flight. Because I won’t be enjoying a second of mine due to the fact that I’m concerned that you’re enjoying yours.

Just remember that although they’re kids, they’re still people. And I’m a person. And I’m just asking that you respect me and them instead of giving me dirty looks like I just murdered someone in front of you. Feel free to talk about me and my kids when we’re off the flight because that’s on you and the person you are. But please don’t let me see or hear it.

I can remember thinking and saying “my kids will never act like that” multiple times before I had kids. And guess what, sometimes they have “acted like that”. But that’s just something that can’t be controlled. That no amount of discipline or guidance can help you control a toddler or infant sometimes. They can’t even communicate yet! How do you expect them to understand and keep their mouths shut or feet in their seats? Most people who have had kids know you’re doing the best you can, but for those of you who don’t, please know we can’t always control it. That we would love to be sitting in silence just as much as you want to be. And we would certainly like to avoid the dirty looks if we could.

It’s hit or miss, really. Sometimes they’re happy with an iPad and looking out the window. But sometimes they’re so overstimulated or overtired they just can’t take another minute of it. How can you help a parent in distress? Please, just be compassionate. Just by doing that, you’re helping us out more than you know. Or buy us a drink… that’ll do too. Kidding. Maybe…

« Deep in the heart of Texas