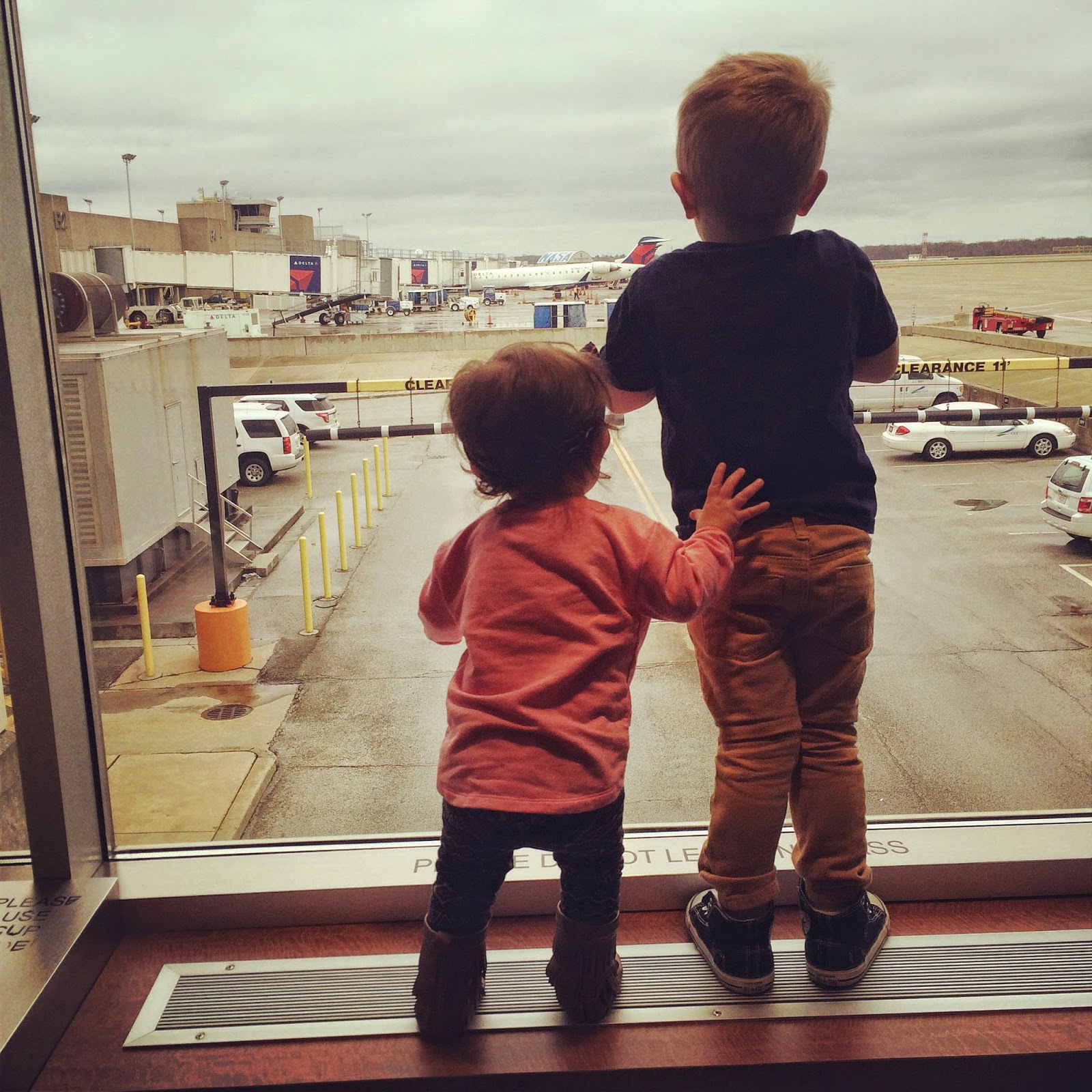 Z’s homecoming was a lot different this go-around. If you read yesterday’s post, you understand why. So when he told me the approximate time frame he would be home, I was scheduled to be up in Ohio. We originally had planned on him flying up to Cleveland right away but then realized he would have to “reintegrate”back at Benning, which could take a few days up to a week.

So I had two choices… stay in Ohio and wait for him to meet us up there or fly down and be here in Georgia when he he got off the plane. And while he would have been fine with us waiting in Ohio, I didn’t want him coming home to no family and an empty house. So I booked our flights and decided I would brave the airport with two kids, two carseats, and baggage.
I had planned on taking a shuttle from the airport to our house; I had even ordered these little contraptions to help me wheel both carseats through the airport. It would be super hard and I was going to go crazy that day but it would be worth it. But my friend told me I was insane and said she would pick me up with her kids’ carseats instead… talk about a lifesaver! 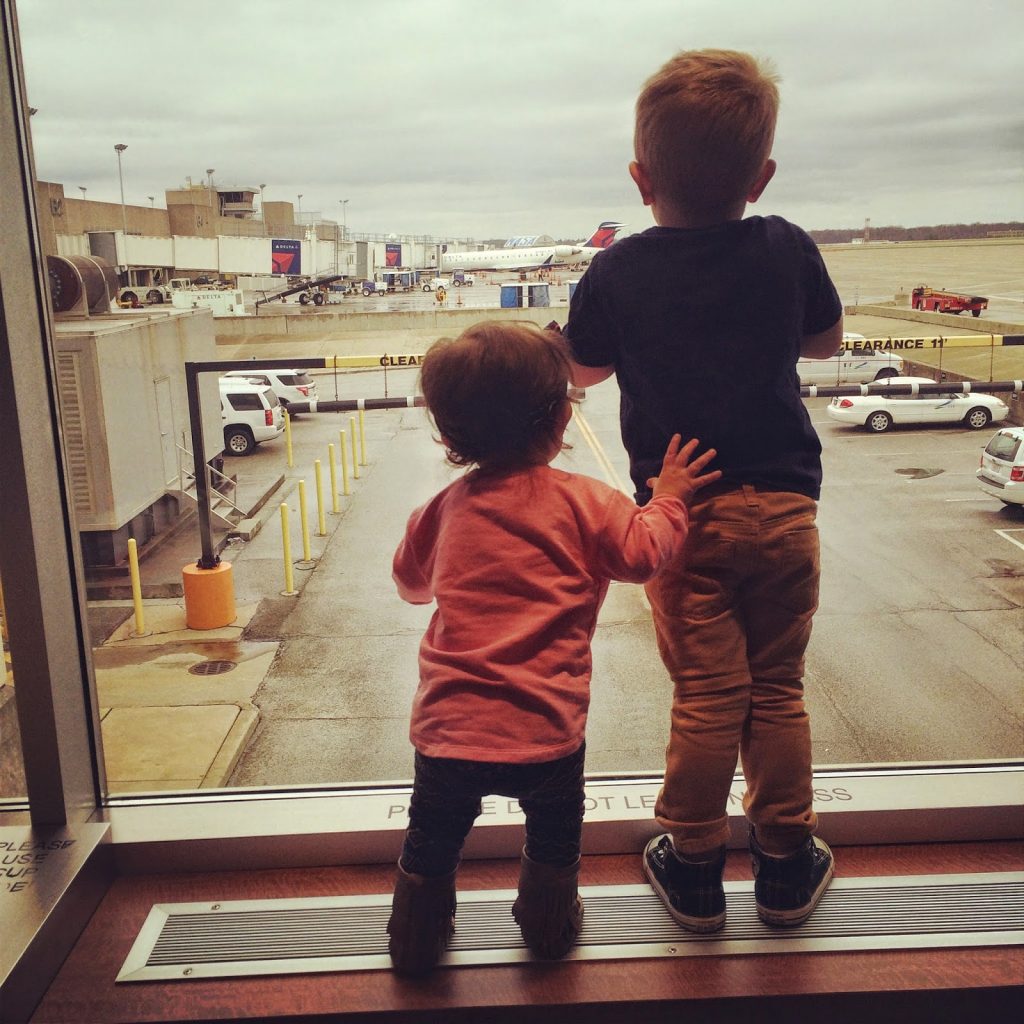 When I booked my flight, I had planned to fly the day after he was leaving the country, so that incase it took a few days, I would be there early. Well apparently, I had misjudged the time it takes for them to travel back to the states and when he received his flight information, I was due in the day after him. Just my luck…
So again, I had two choices. Keep my flight as is and have HIM pick ME up from the airport. Or switch my flight and get in the day before him. So a ton of extra fees and headaches later, I had switched our flights to arrive the day before him. 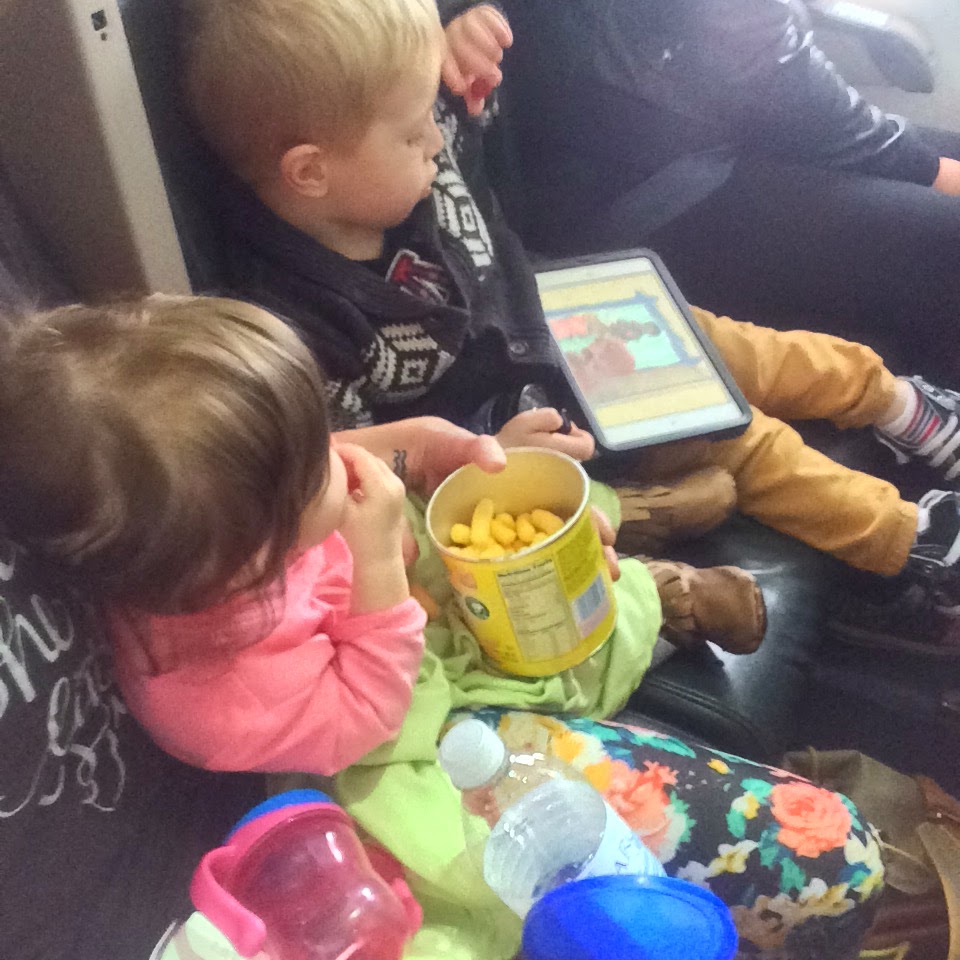 My friend picked me up and we headed back to prepare for the next day’s events. 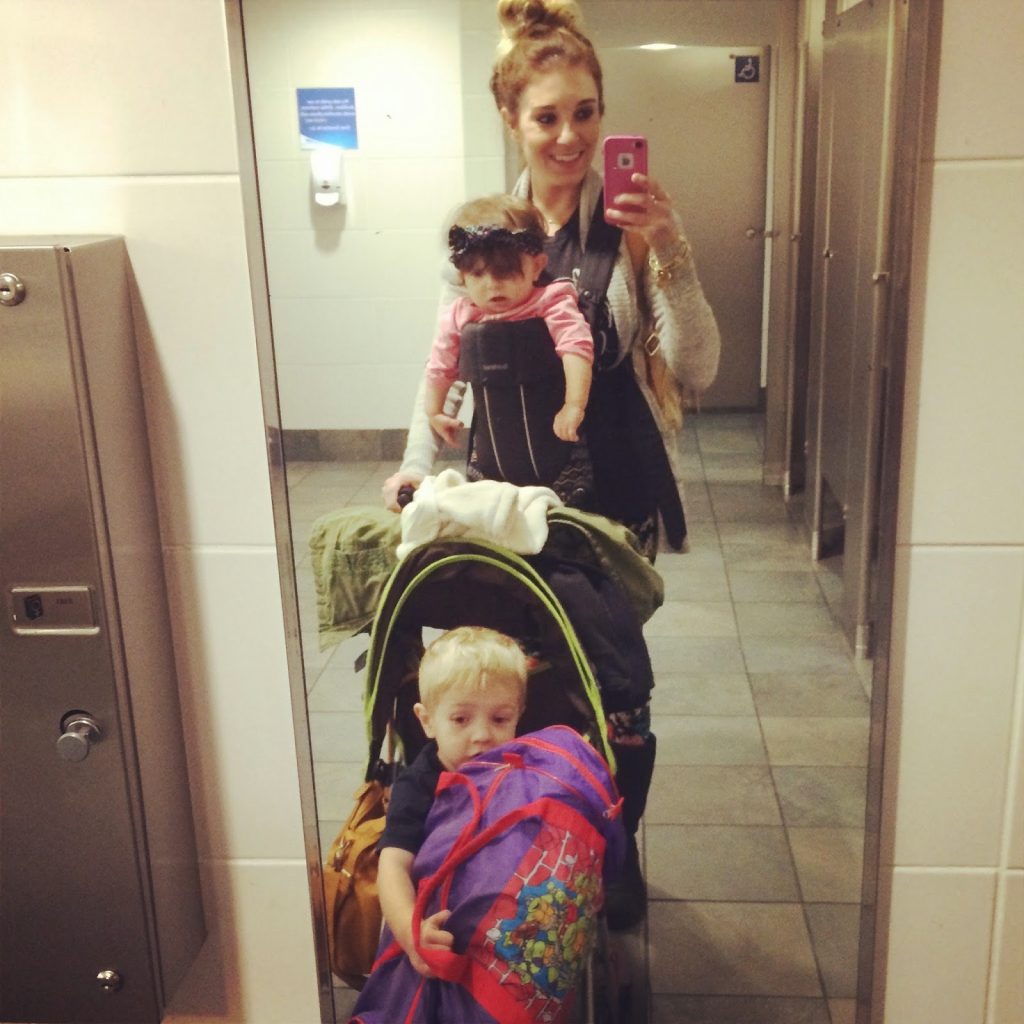 I couldn’t believe it was finally the day. I had been keeping our secret for weeks and couldn’t wait to have Z home. I had ordered special shirts for the kids, decorated the house, and anxiously awaited the phone call to let me know he was in the US.
When it was time to leave for the airport, I hadn’t heard from him yet. But I figured he was busy going through customs, making sure he made his connection, and figured maybe his phone even died. He was supposed to get in at 6:30 pm… He finally called me at 5:45 pm and told me he was still in Baltimore. They had missed their connection.
We were all devastated. We were already in Atlanta and he had been traveling for over 24 hours… now this? He told me they were going to work on getting on another flight and we should just hang out there to see what was going to happen. Despite it being late, the kids being exhausted, and no idea what was going to happen, we tried to stay positive. He was on US soil so at least I knew he was safe, right? 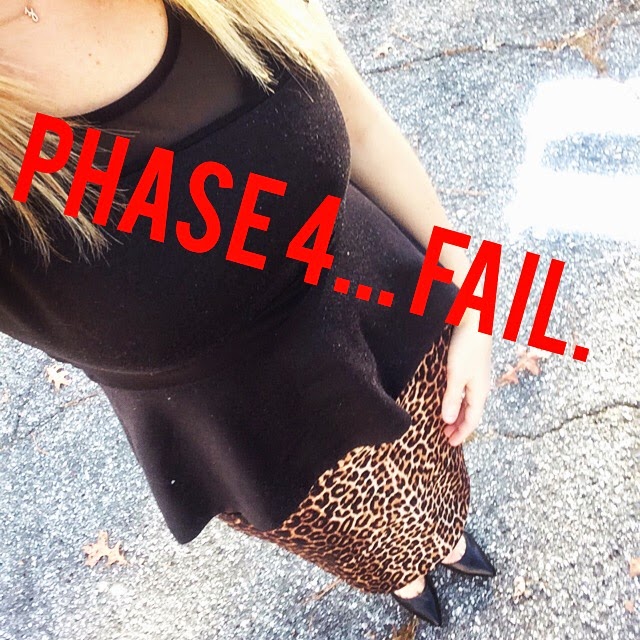 We headed to dinner to wait for their call. The kids were out of control; in and out of the booth, making a mess on the table, and not listening. Paislee choked on a Goldfish, and I mean I literally had to turn her upside down and smack her to get it out. And almost immediately after that, he called to tell me there were no flights out of Baltimore until the following morning. So today wasn’t the day after all.
He was upset. I was upset. We were all tired, angry, and emotional. We tossed around the idea of staying overnight in Atlanta so we wouldn’t have to make the trip again but it wasn’t going to work. So we packed the crew up and headed back to Fort Benning, again. Tomorrow would be the day… tomorrow had to be the day!
I barely slept that night. It had been an emotional roller coaster since we left Cleveland a few days prior. We obviously left our car in Cleveland so I was tired of planning rides, bothering other people to shuttle us around, and dragging my poor kids to and from here and there. Traveling isn’t fun period, but traveling that much in such a short period of time begins to take a toll on them. They’re little; they have routines, need to eat and sleep to function properly and I felt terrible everything was so chaotic. 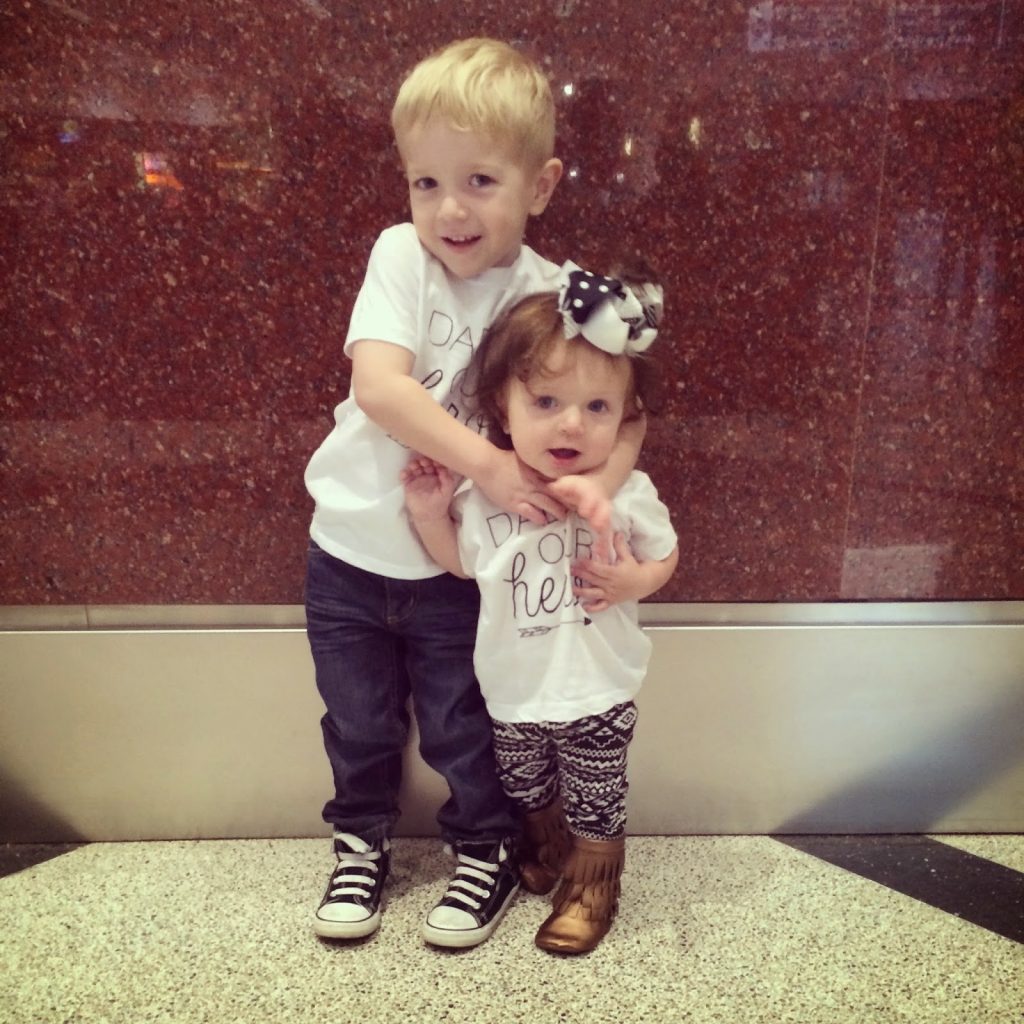 But at the end of the day, they would get their Daddy back. And that’s all that mattered.
We headed back to Atlanta, again, for the third day in a row. Which is actually more than I’ve been to Atlanta the entire year I’ve lived here! But we headed to baggage claim and waited. We watched hundreds of people come up the escalator and kept our eyes peeled for our soldier.

And then he appeared. Nolan took of like a bat out of hell and squeezed Z tighter than ever. Paislee had been ready for a nap and wasn’t so sure of what was going on. But Nolan, he didn’t let go of Zach for a second. Our hearts were whole again. 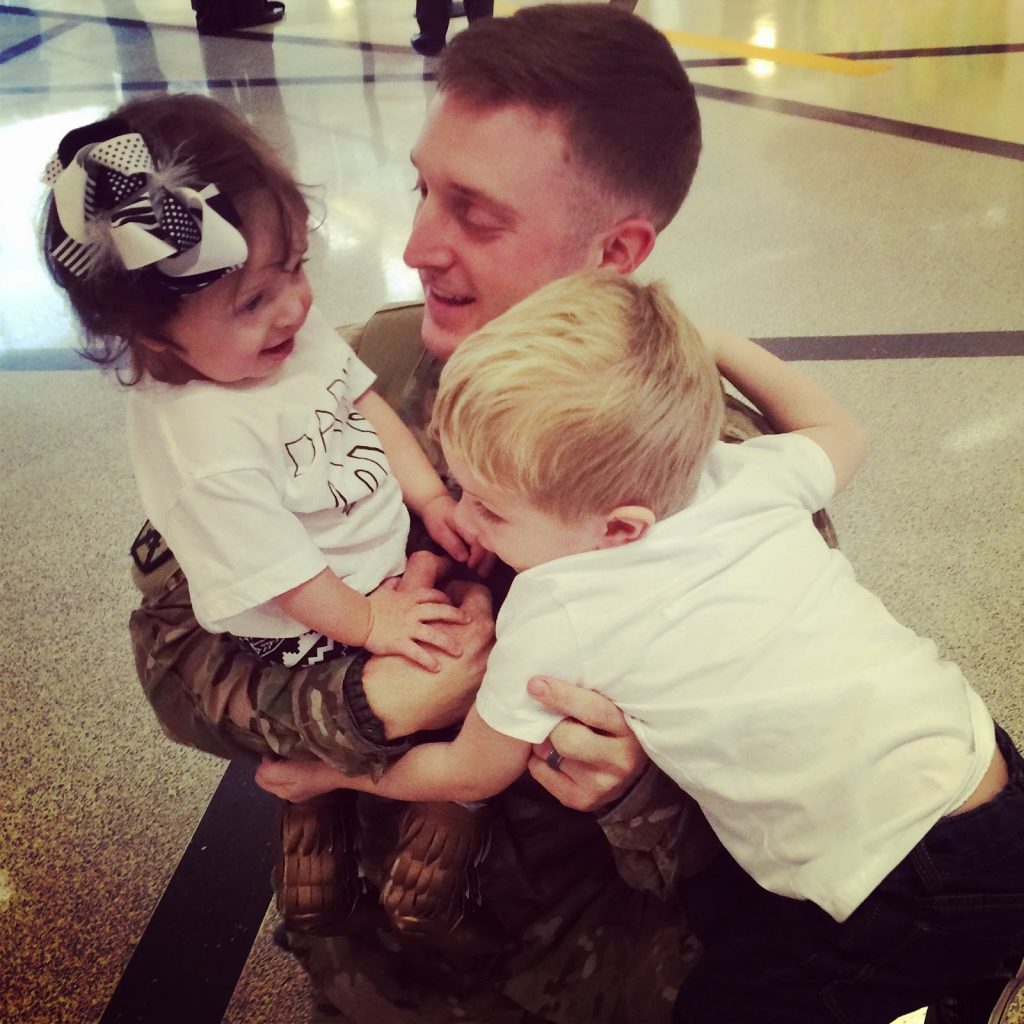 I know it was only four months and it wasn’t some big elaborate homecoming as his previous one had been. But it meant a lot to our family. We had gone through some crazy shit the past few months and to receive such an amazing gift, completely made up for all of it. It was something we never expected to happen and I will be forever grateful.
Thank you for following along with our journey and supporting us through all of this. We are beyond happy to be reunited again. And until all the troops come home, we will continue to pray for them. I wish I could wave a magic wand and bring everyone home early or home all together. But since I can’t, the best thing I can do is pray. Everyone deserves a special moment, and I will pray that everyone gets that too.

What to wear for a military homecoming. »