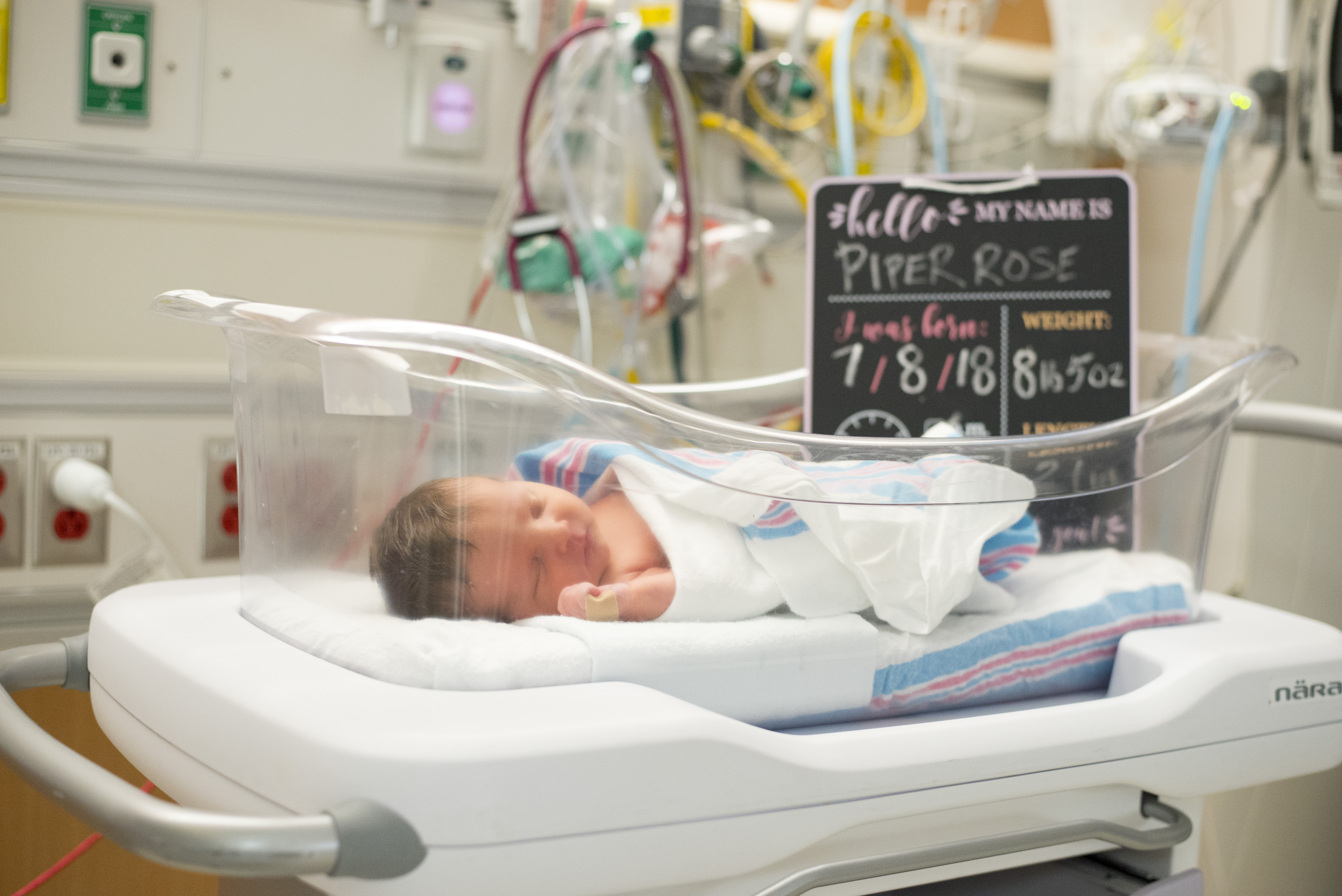 This post is going to be difficult to write because it’s something I never thought we would experience. And while our stay was short compared to a lot of other babies, it was still one of the most challenging weeks of my life.

Since I had Gestational Diabetes, we knew they would be checking Baby P’s blood sugars after delivery. Since my body hadn’t been producing enough Insulin to break down the sugars I was ingesting, her body was over producing to compensate for it. So when she was born, her body was still doing that, causing low blood sugars.

They checked her sugar levels each time before I fed her to see if they were starting to regulate themselves. And each time, she was borderline low. They kept hoping it would get better each time I nursed her and as the day went on but unfortunately, she was on the low end each time.

35 hours after birth, the pediatrician recommended I try to supplement with formula to see if that would help get her sugars up. So we tried, and the result wasn’t what they wanted. So we awaited a call from the pediatrician to see what the next steps would be.

And then my heart dropped when they told me she would need to go to the NICU. I felt guilty. I felt like a failure. Why was this happening? How long would she be there? I pictured her little body being poked and prodded and stuck with an IV and I just felt so sad. Was it because she was early? Were my numbers less controlled than I thought? Was it my fault?

They came in the room and told me it was time for her to go, and that we could go down there and visit in an hour when she was all settled. I bawled. This wasn’t how it was supposed to go; I was told I would be leaving 24 hours after delivery and now we were going to the NICU for an indefinite amount of time. We anxiously awaited the nurse to come in and get us and then walked down to the NICU. 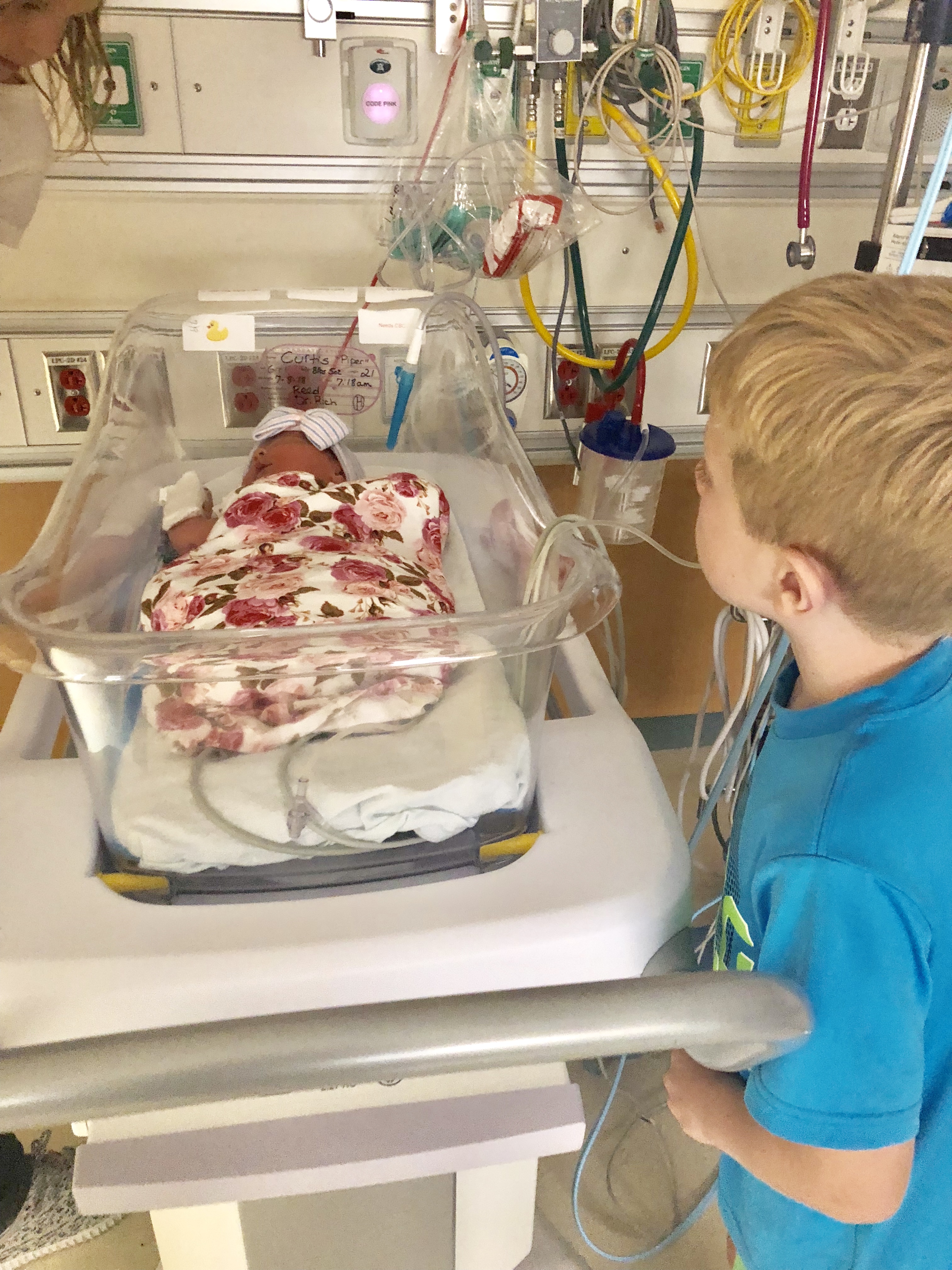 I cried immediately upon seeing her. So tiny and so innocent, she laid there while hooked to monitors and an IV dripped fluid to help regulate her sugars. We sat there and chatted with the nurse and discussed the plan moving forward.

She was on a schedule of eating at 8 a.m, 11 a.m, 2 p.m, 5 p.m, 8 p.m, etc. Every 3 hours. Luckily I was still able to nurse her so I would nurse for 30-45 minutes, pump immediately afterwards, and then go back upstairs to get another hour and 45 minutes of sleep. It was mentally, physically and emotionally exhausting but I wanted her to get better and would have done anything to make that happen.

Since I was only allotted two days at the hospital after delivery, this discharged me on Tuesday evening. It was heartbreaking getting discharged and not leaving with my new baby. Luckily, I was able to sleep on the couch in the NICU but I didn’t really sleep.

Her IV machine would go off every hour on the hour.

I was in pain from delivering.

Her leads would often come off and start beeping, of course sending me into a panic.

Not to mention I was setting alarms and waking up to nurse her every couple of hours too.

They were checking her sugars before every feeding and then switched to every other feeding because her heels were getting so beat up. We anxiously awaited the results every time and it was soul crushing when her numbers weren’t where they should be. They would raise her IV fluids, check again, lower her fluids if they were at an acceptable level, and it became a waiting game.

Then the mom guilt set in because I wasn’t home with the other kids. My husband felt guilty not being there with us. It was a mess. And then on the second night, I was readmitted to the hospital for postpartum preeclampsia. Which I’ll get into another time as well. That’s a whole horse of a different color… 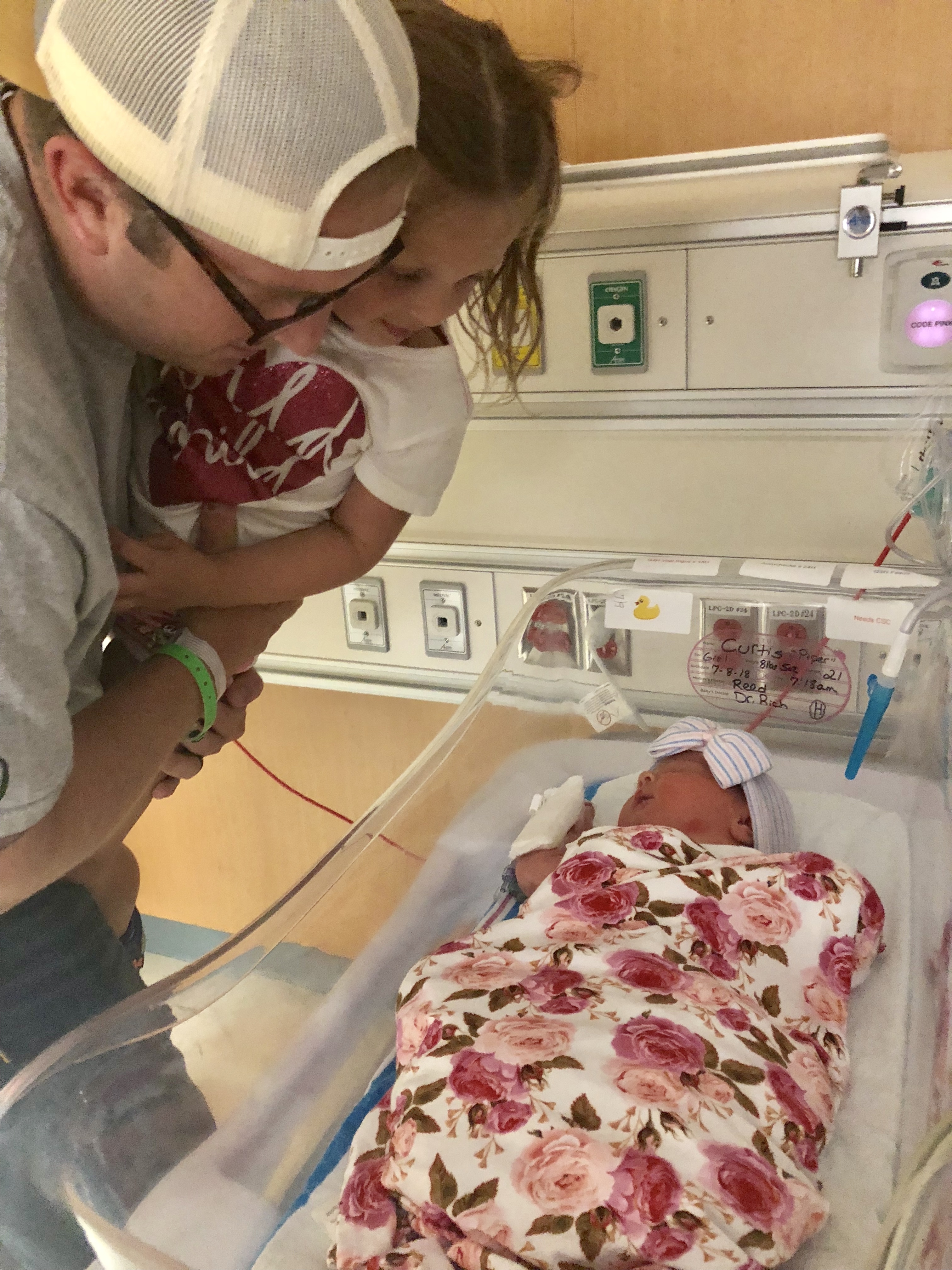 After 5 days in the NICU, her numbers started to stabilize. We anxiously awaited rounds to see if they would let her leave or make her stay longer. And as much as we wanted to go home, we didn’t want to leave until she was 100% ready. On Friday afternoon, the nurse checked her sugar, the neonatologist poked her head in and we yelled her number out. And then she said “Go ahead, get out of here!”

Our prayers had been answered. Our baby girl was coming home!

I cannot thank the NICU nurses and doctors enough for their compassion and kindness during those 5 days. It truly takes a special person to be a NICU nurse and they were such a blessing during such a difficult time. They held me as I cried, treated my baby like their own and celebrated with us when we got the good news. We are forever thankful for everything they did for us and will never forget them.

Baby girl is home now and thriving. Everyone kept telling me this would be a distant memory one day and that she would never remember anything. Thankfully, that’s true. And although we’ve only been home a week, it feels like it’s gone so fast compared to our 5 days in the NICU. With so many unknowns and fears, it felt like an eternity while we waited for each result and each feeding. But now we appreciate being home so much more. I’ll gladly take the sleepless nights (although knock on wood, she’s actually she’s a really good sleeper) if it means a healthy baby home in our arms.

I’m counting my blessings because I know so many of those babies in the NICU were there before us and will be there after us. While we were lucky to only be in there for a short period of time, it was still a challenge in many different ways. I attended a “family meeting” one night with other NICU moms and truly just wanted to hug each one of them. They understood what it was like being there and each of their stories were so moving. Each of them are in my prayers and I hope that all NICU moms find peace and comfort in knowing they’re not alone. And that they will get through this.

A big thank you for everyone who sent prayers and messages during our stay. I was so overwhelmed with the love and support and truly believe every prayer was heard. Thank you from the bottom of our hearts!