This is a sponsored post written by me on behalf of 7-Eleven Franchising for IZEA. All opinions are 100% mine.

My husband doesn’t plan to make a career out of the military but during his time, he has learned discipline, perseverance, and faced adversity. He has been a leader, challenged himself, and perfected specialty skills. He has traveled the world and served our country. And I am so proud to be his wife. 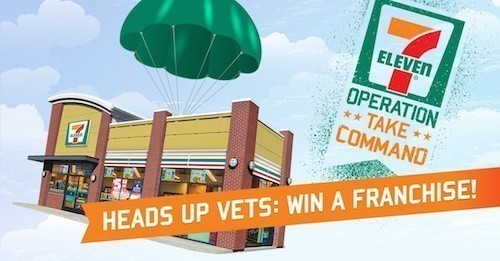 There are so many factors that can affect a military member’s success after his or her career, and 7-Eleven has decided to do their part by giving away a Franchise to one lucky veteran. President and CEO of 7-Eleven Inc, Joe DePinto is a military veteran himself and understands the importance of hiring and employing U.S. veterans.

In the past four years: 203, 890 new vet and military spouses have started franchising careers, 5,608 vets have become franchise owners and in the past year alone, 50,000+ vets have found employment in the franchise industry. Specifically, 7-Eleven provides franchise owners with the store, land and equipment. And within 3-6 months, franchise owners are trained and are ready to go! And of course, they’re surrounded by an amazing support system throughout the entire process.

If you know someone who is looking to take a leap of faith, please tell him or her about this contest! Our veterans deserve the world and thanks to 7-Eleven, they may be able to win their very own franchise. 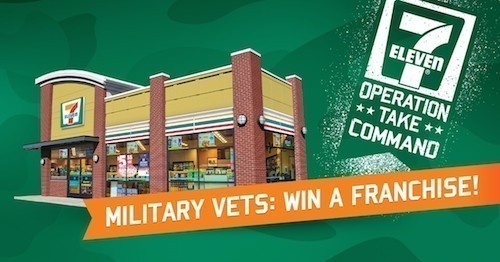 Thank you to those of you who serve or have served. We are forever grateful. Now go enter 🙂