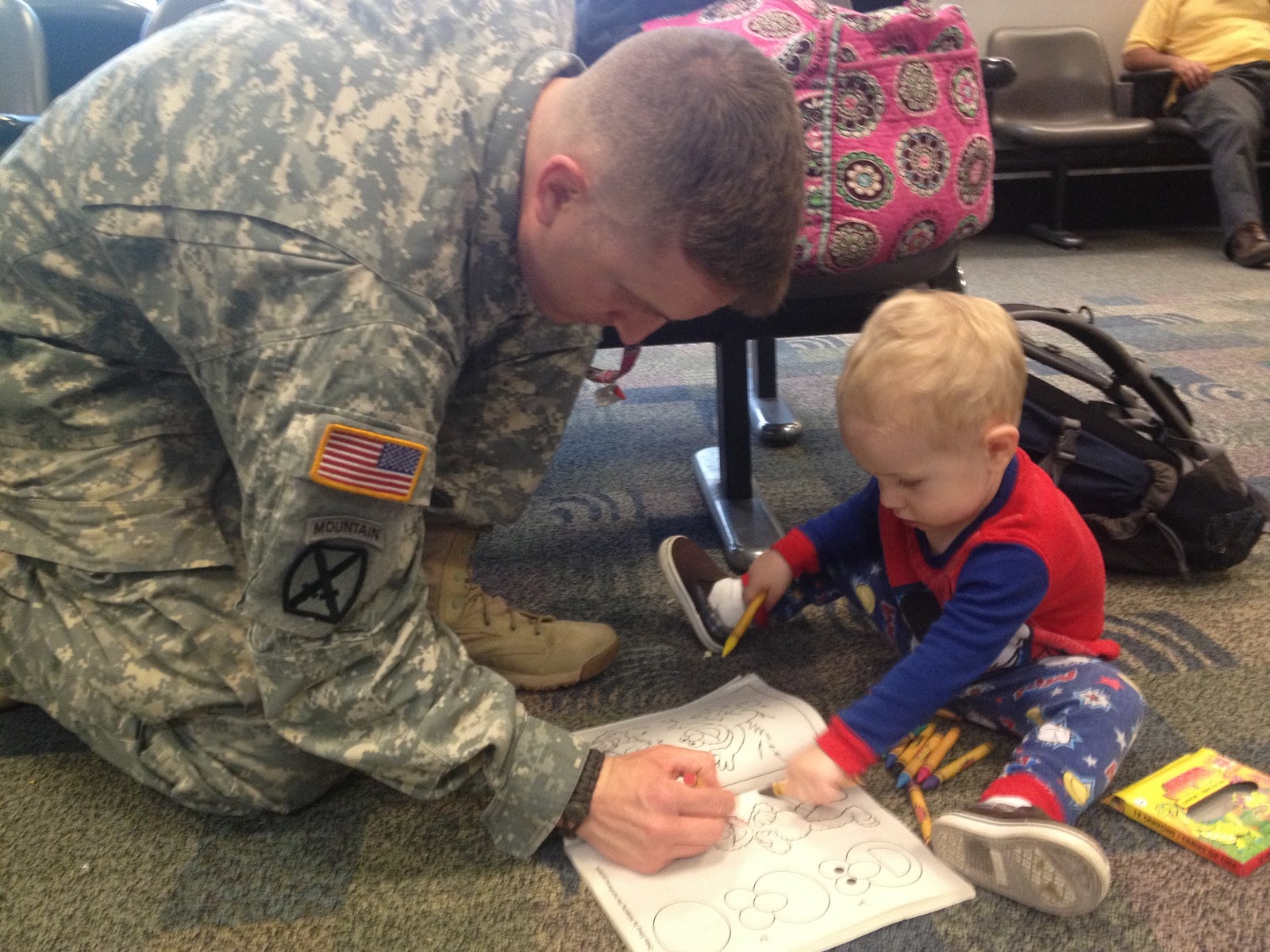 LADIES! I feel like I haven’t “talked” to you all in days! And well, partly because I haven’t. I was in Texas as of late Thursday night/Friday morning and got in late Monday night/Tuesday morning. Exhausted is an understatement and to say I have some interesting stories well, also an understatement.
I’ll begin with this one…
After a two hour delay in Syracuse, we finally boarded the plane for our first flight to Chicago. The delay actually played to our advantage because Bubba was able to run around and burn energy for the entire two hours as we waited. He only cried for 10 minutes on the plane and then was out like a light.
Because our flight had been delayed, we were worried we wouldn’t make our connection to Dallas/Fort Worth after arriving in Chicago. The man at the Syracuse airport told us our connection was also delayed and that we should have plenty of time to make it. As soon as we landed in Chicago, we took off sprinting Home Alone style through the airport. I sent Z ahead because I was carrying a 25 pound child and well, slower than him in general.
After a 10 minute run and nearly having an asthma attack, I make it to the gate…only to see my husband standing there and staring out the window. A few choice words exited my mouth as adrenaline pumped through my body. I looked out the window and saw the plane sitting there, detached from the jetway, not moving.
“Oh we’re getting on this plane” I said and I began to take matters into my own hands. I was furious at this point, and nothing was going to stop me. I started banging on the window, trying to get the attention of lady below, hoping she would tell someone to let us on. I hit the intercom “help” button, only to reach security, who told me I needed to find someone from the airline but NO one was around.
So I did what any normal person would do; I stepped behind the airline check-in desk, picked up the phone, and began searching for any number I could call for help. To my surprise, the phone next to me rang and naturally, I picked it up (if you watch Boy Meets World, you may remember an episode where they always encourage picking up a ringing phone. Life lessons people, life lessons).
Person on the phone: “Is there a military man trying to get on the plane?”
Me: “Yes, it’s my husband! Please we need to get on this plane.”
Person on the phone: “Ma’am you shouldn’t be answering this phone. I need to speak with an American Airline representative or I can’t help you.”
Me: “I don’t see anyone…wait! I see someone, hold on and I’ll go get her.”
I sprinted across to the other side of the airport and begged the woman to come speak with the other lady on the phone. Her attitude was less than pleasant as she told me she could not open the door to let us on. I told her that’s not what I was asking her to do, but rather just speak to the woman on the phone and see if she could help us.
After speaking to the other lady, two other employees walking over, and silence as we waited, they basically told us we were shit out of luck and we weren’t getting on the plane. Tears swelled in my eyes as we sat there not knowing where to go, what to do, and when we would make it to Texas.
We argued with the employees and became more furious as time went on, not because they wouldn’t let us on the plane but for their blatant lack of respect, especially with my husband in uniform on Memorial Day Weekend. As we started to walk towards the rebooking gate, we heard “wait” and we stopped in our tracks.
The Captain had decided to reattach the jetway and let us on. I couldn’t believe it. My adrenaline was still rushing through my body and my tears still flowing like no tomorrow. We picked up our bags, waited for them to unlock the door, reattach the jetway, and let us on.
I couldn’t believe it. Not only could I not believe they didn’t wait for us KNOWING we were on a delayed connection within minutes of take off, but the lack of respect and sympathy they had for us. Regardless of whether or not my husband was in uniform, these ladies could have cared less. They weren’t apologetic, they weren’t kind, and they certainly weren’t helpful.
But when all was said and done, we made it to Texas and I was SO thankful for the sweet Captain who understood how important it was for us to get on the plane.
To be honest with you, I was terrified I was going to have TSA personnel waiting to arrest me when I landed in Texas. I was less than lady-like and touching things I wasn’t supposed to be. But hey, if no one else was going to help me, was I just supposed to stand there and watch my plane leave without me? Hell to the no.
So lesson be learned: always answer a ringing phone, fight to the death, and never take no for an answer 🙂