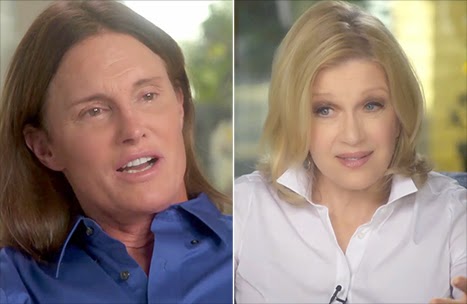 I think a lot of people had a strong reaction to the news that Bruce Jenner was transitioning to a woman. Either you didn’t care, you were shocked, you thought he was crazy, it was a publicity stunt, whatever. People heard this and thought “is this really happening?”
I’ll admit that I was in shock when I heard the news. Whether or not you follow the Kardashians or care about Bruce Jenner, it’s not something you hear about everyday. And when I first heard it, I thought “wow, he’s really gone off the deep end now”, as if he made the decision overnight. Like he just randomly woke up and decided he wanted to be a woman.
And that couldn’t have been further from the truth.
The two hour interview was painful to watch at times. To see this man struggle with his gender identity and live with it for so long was heartbreaking. He explains how he felt as though he was born with a female soul and knew it from a very young age. He didn’t like saying that he was a female stuck in a male’s body, but rather that it was just how he was. That he has always identified more as a woman and been living a lie his entire life.
Most people have no idea what that’s like. We wake up every morning and live our lives as ourselves. We can live freely and happily and not have to pretend to be something we’re not. And most of us aren’t even celebrities. I can’t imagine being in the limelight let alone on a “reality” show, being seen as a strong male figure in a house of females, while deep down struggling with a secret he has kept his entire life. And although it’s been a difficult time for his family, the Jenner children are supportive and understand how hard this has been for their dad.
This was certainly not a rash decision. Bruce started taking hormones in the 80’s and said he finally felt a sense of relief. As if his body had been craving the female hormones. All three of his wives knew of his internal struggle and kept his secret for years. When asked if he was attracted to men, he explained that gender identity and sexuality are two different things. That he’s always been attracted to women and that hasn’t changed. But he’s always identified as a woman and that’s just how God made him.
Diane Sawyer interviewed his sister and she reveals that he had told her about this years back. That he admitted he used to dress in his mother’s and sister’s clothes when they weren’t home.  He would mark the closet so he could put everything back in the same spot and not get caught. He had no idea why he did it, other than it made him feel good at the time.
So why the public interview? Why talk about it with the entire world? Because he wants to raise awareness. He made sure to acknowledge the transgender community and say that he doesn’t want to step on any toes, and that they certainly know more than he does. But he wants to work with them to talk about this topic. That people shouldn’t be afraid to be who they are and if they’re unsure of the feelings they’re feeling, there are resources and people who understand. So that unlike him, they don’t have to wait until the age of 65 to be who they really are.
This may seem “unnatural” or “weird” to some people, and yes, I will admit I thought it was strange when I first heard the news. But why? Probably because I’ve been following the family’s story for years and had no idea (obviously). But if that is who he says he is, than he deserves to be happy. I won’t get into politics and talk liberal or conservative with you. But you know what Bruce identifies as? Conservative. But this doesn’t affect who he knows he is deep down. He just wants to be happy and he deserves something that simple.
I think it was extremely brave to do something like this, and if anything, I hope it gives other people a glimmer of hope that they can be themselves too. It made me extremely thankful that I don’t have to struggle with something so difficult and my heart goes out to all of those who do. If you don’t “agree” with it or “believe in” it, that’s fine. We are all entitled to our own opinions. But it’s not my life. Him transitioning into a woman doesn’t affect me one bit. So why doesn’t he deserve to be happy too?
Did you watch the interview? What did you think about it?

« Get suave with Suave.