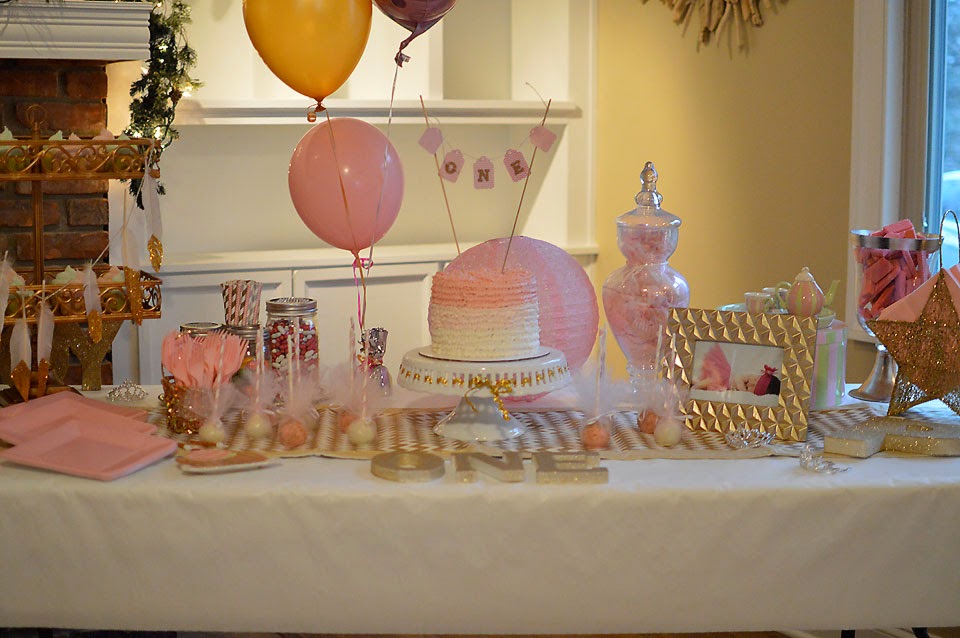 Celebrating birthdays are a big deal to me. Not mine, or at least they aren’t anymore. But I absolutely love celebrating other people and the day they were born. Even if there isn’t a party involved, coming downstairs on the morning of your birthday should be magical.. at least in my opinion 🙂 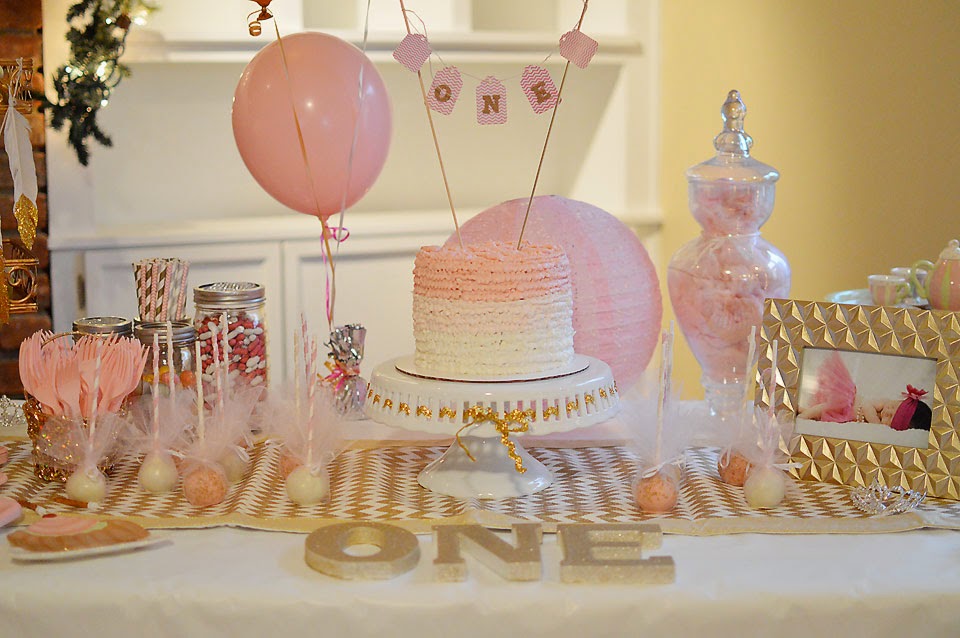 So when I started to think about Paislee’s 1st birthday, I knew it didn’t really matter to her because obviously she’s too young to ever remember it. But I wanted to do something girly, classic, and chic, mostly because I love planning parties and making them as special as I can.
There were a few things that went into picking her “theme”:
1. These colors. Hello, my blog design… kind of obsessed right now 🙂
2. A gift bag. I have no idea where I got this gift bag from but the colors and whole feel of the bag were absolutely beautiful and I wanted to incorporate them all somehow. 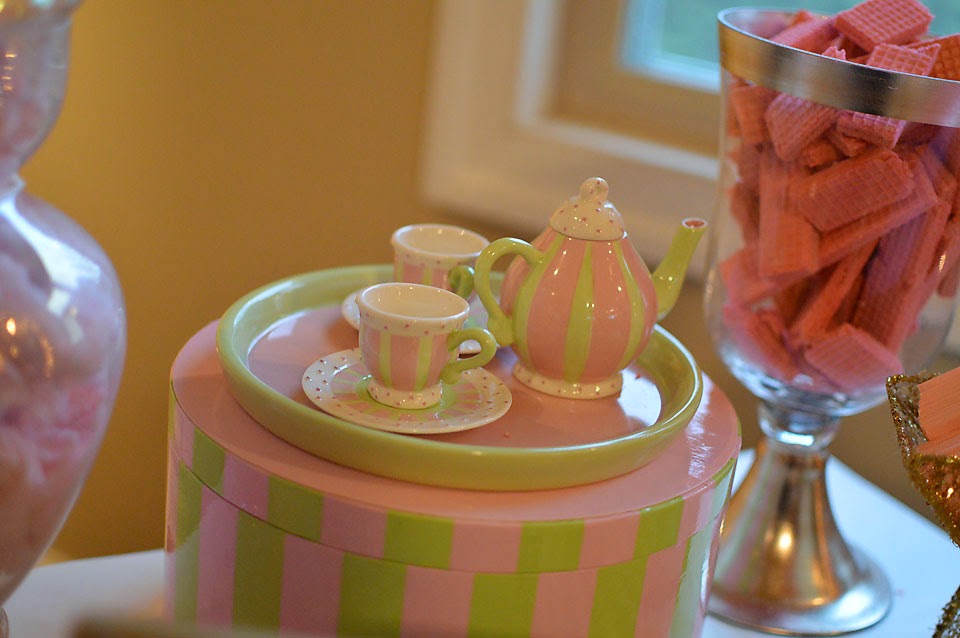 3. This tea set. I bought it off a garage sale page for $20; it was brand new, in packing, never used… and I had to have it!
So then the wheels started turning. I started buying things here and there a few months ago, but really bought the bulk of the stuff these past few weeks while I was home. I went a little nuts at Home Goods, but I made sure to buy things that I would use again. I didn’t worry too much about being matchy matchy, and just tried to find shades of gold, silver, pink, and mint green. 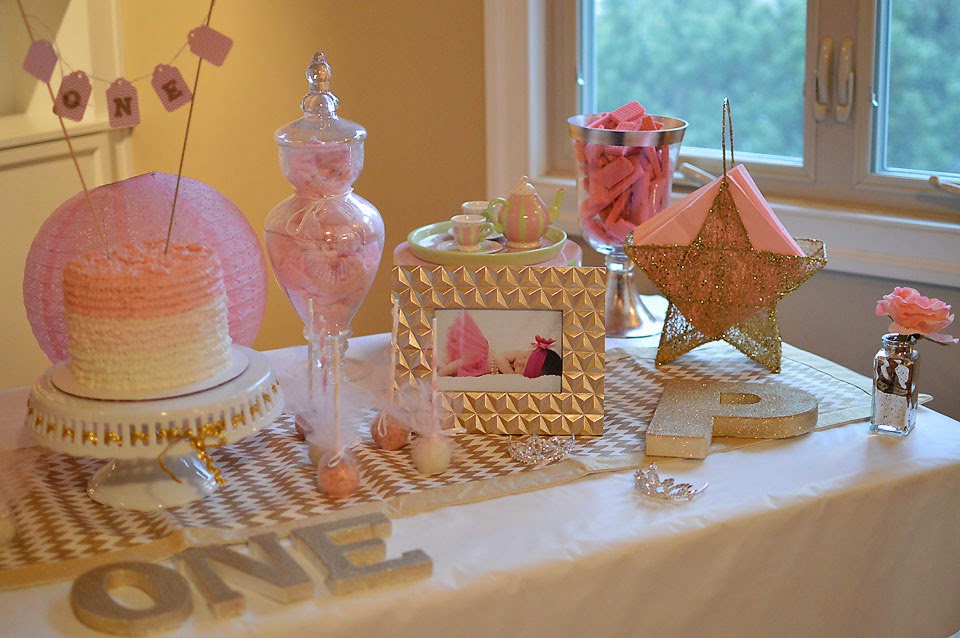 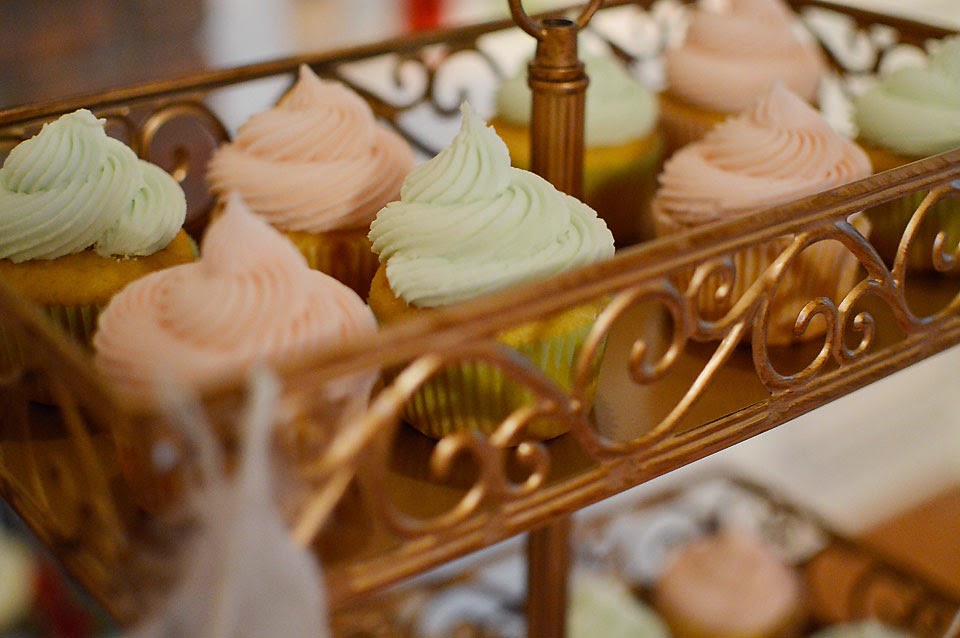 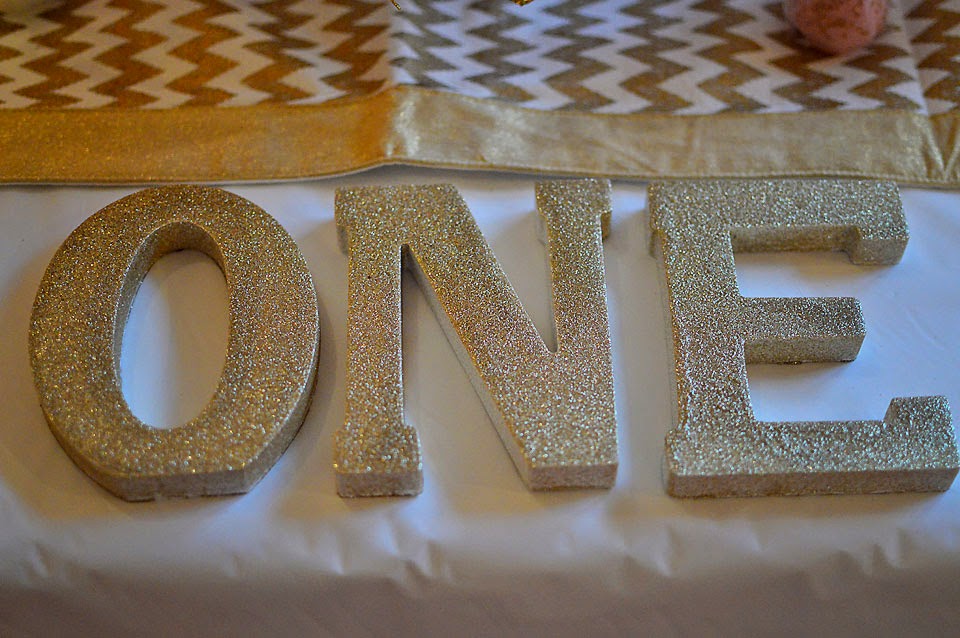 I bought these letters at Michael’s and a coat of spray paint later, we were in business. I had them standing up at first, but then decided I liked how they looked laying down better. I also bought a canvas P and spray painted that as well. 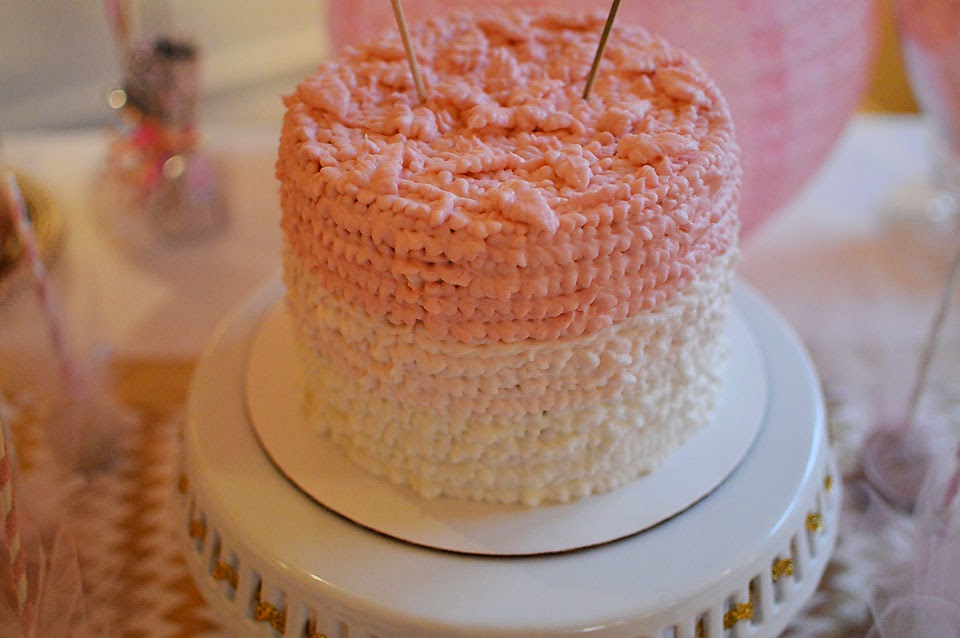 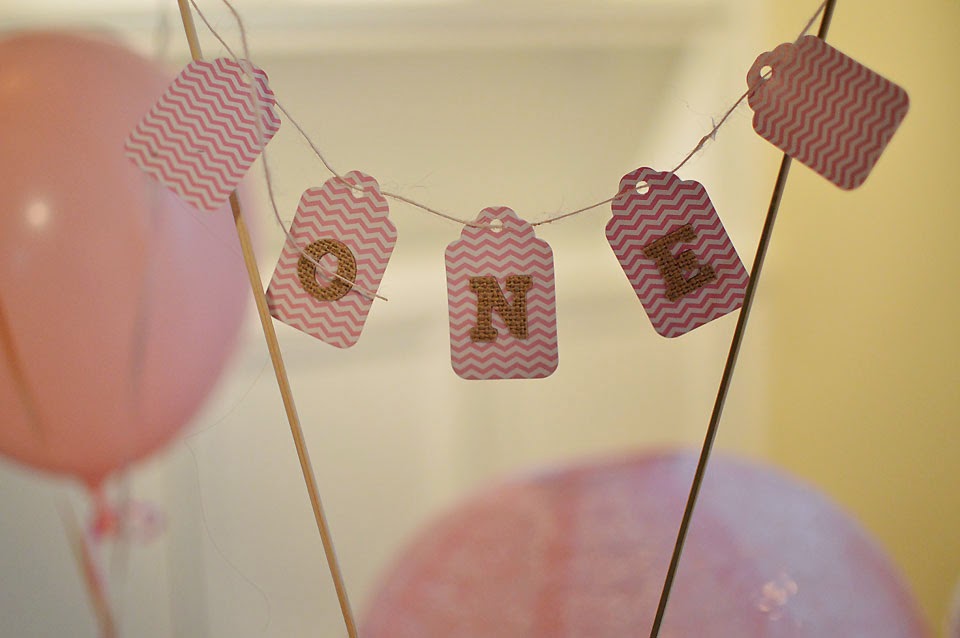 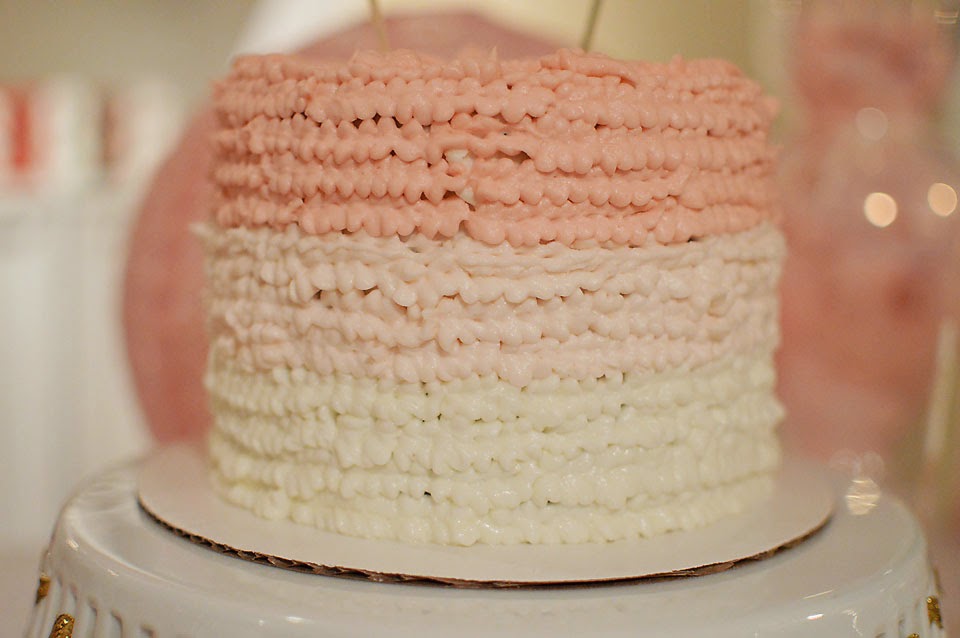 A friend of mine from high school recently started her own little baking business on the side…and she’s amazing! She also made a cake and cake pops for Nolan’s baptism and I was so excited to work with her on P’s birthday too. I sent her a few ideas, my decorations, and the color scheme and she came up with this adorable smash cake, cupcakes, and cake pops. All homemade and utterly delicious! 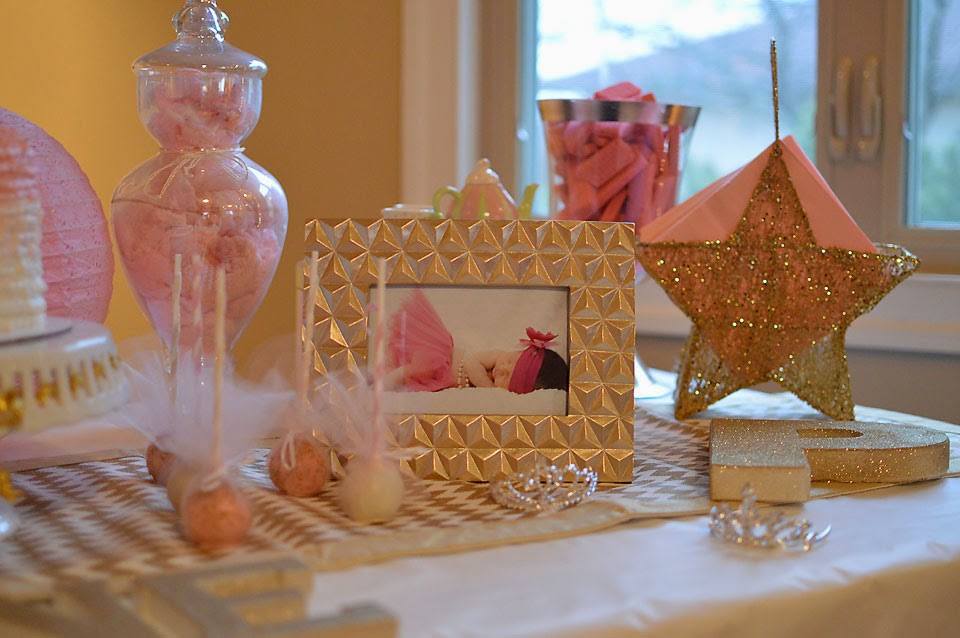 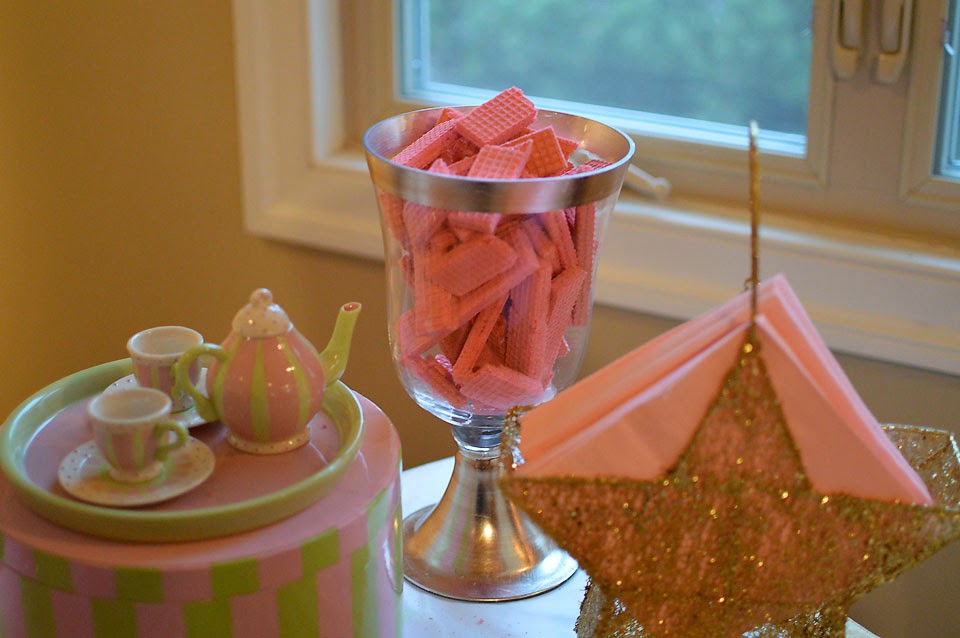 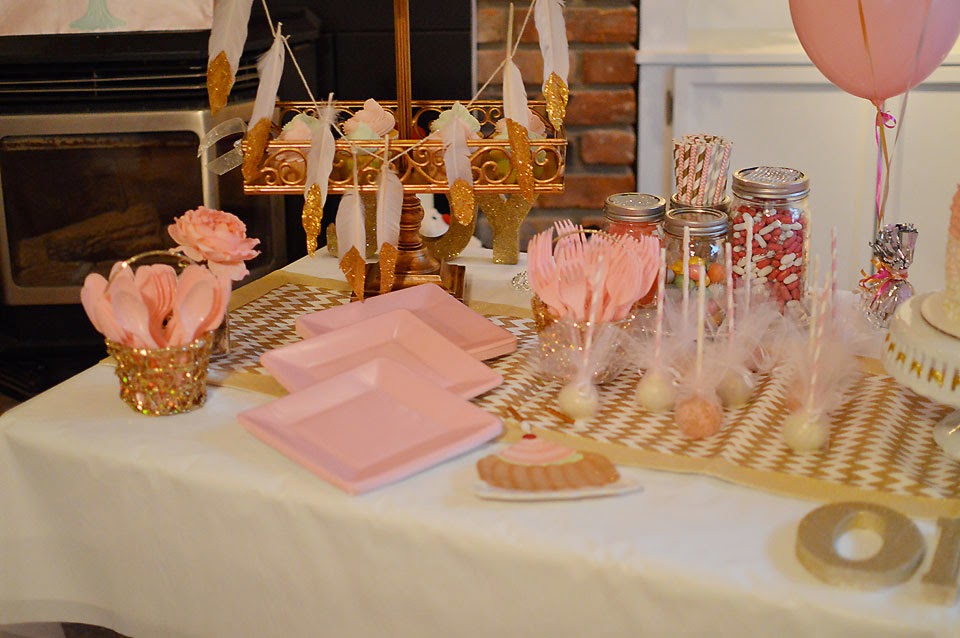 I figured out a lot of stuff as I went along. I literally just kept picking up miscellanous things as I found them and figured it would all come together eventually! A lot of the gold stuff was on clearance around Christmas time, so I highly recommend taking a look and thinking ahead if you have any parties to plan. You can figure out what to use them for down the road. 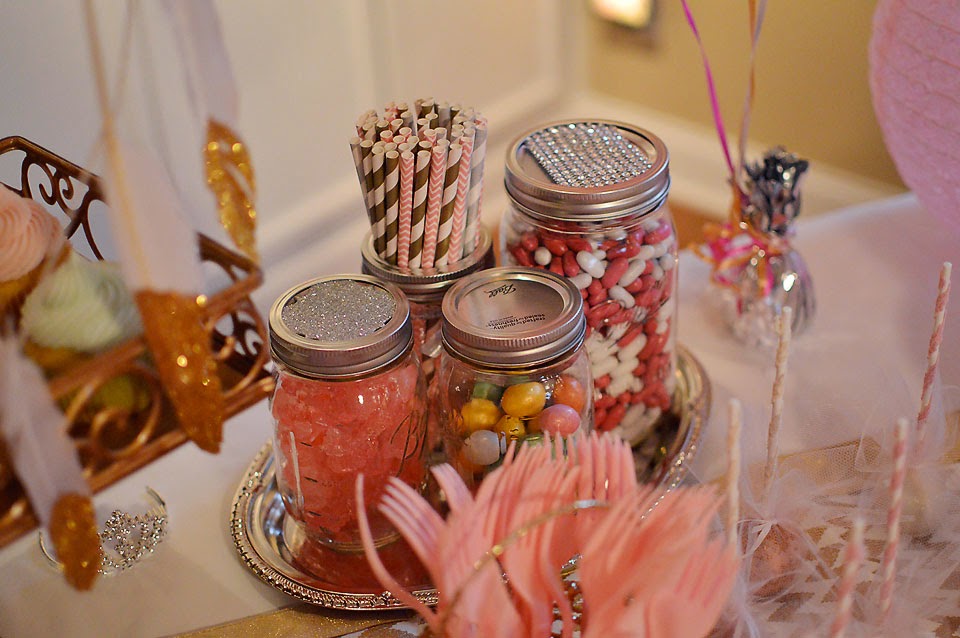 I bought the candy from the grocery store where you can fill your own, so I only paid for what I needed. It was mostly for decoration but I obviously wouldn’t have cared if someone wanted to eat it too! The little crowns came from a dollar section somewhere, the runner was on clearance at Target right before Christmas, and the silverware, plates, napkins, etc came from the Dollar Tree. See… no real plan! 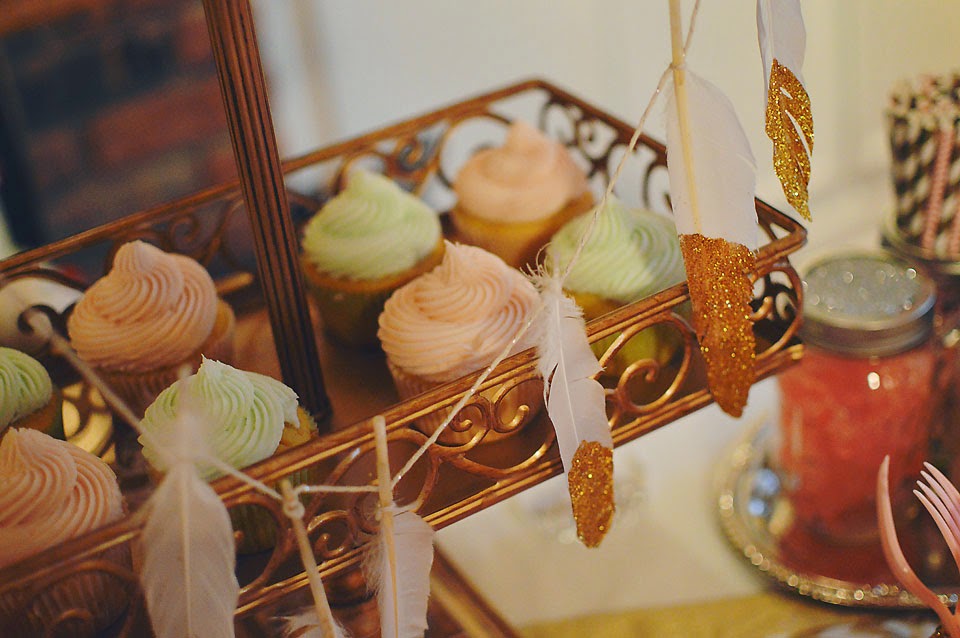 I won this beautiful feather garland during an auction but I hadn’t even thought about using it for her birthday while I was bidding on it. But once I got it, I knew it would be perfect on her birthday table. I also used the garland that’s normally above her crib across her highchair. Try to pull from their room or only get things you will use again! 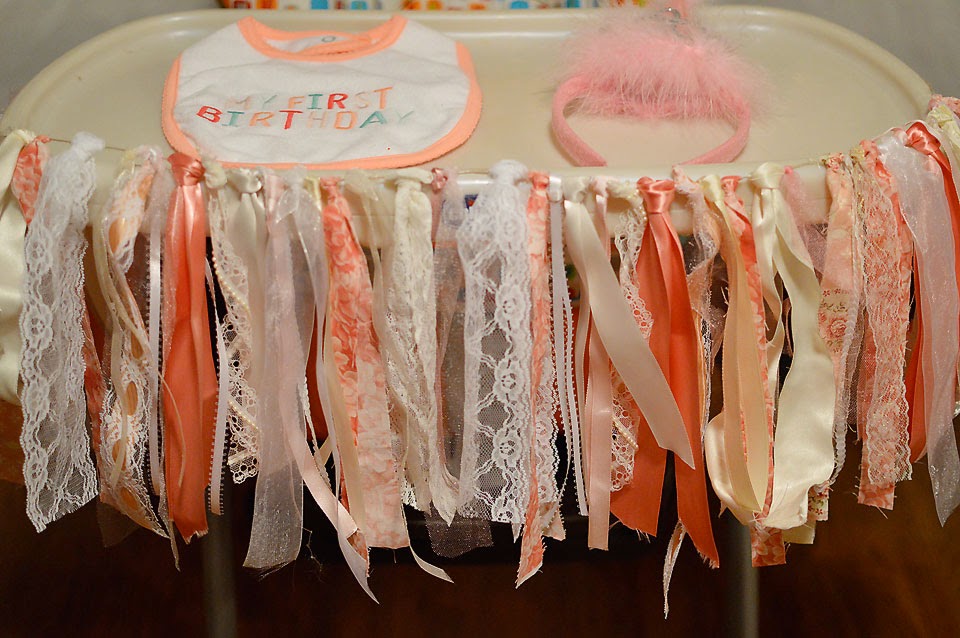 And how gorgeous are these cake pops? It’s hard to tell in pictures but seriously, I didn’t even want to eat them because they were so beautiful. Edible glitter and shimmer? I die. 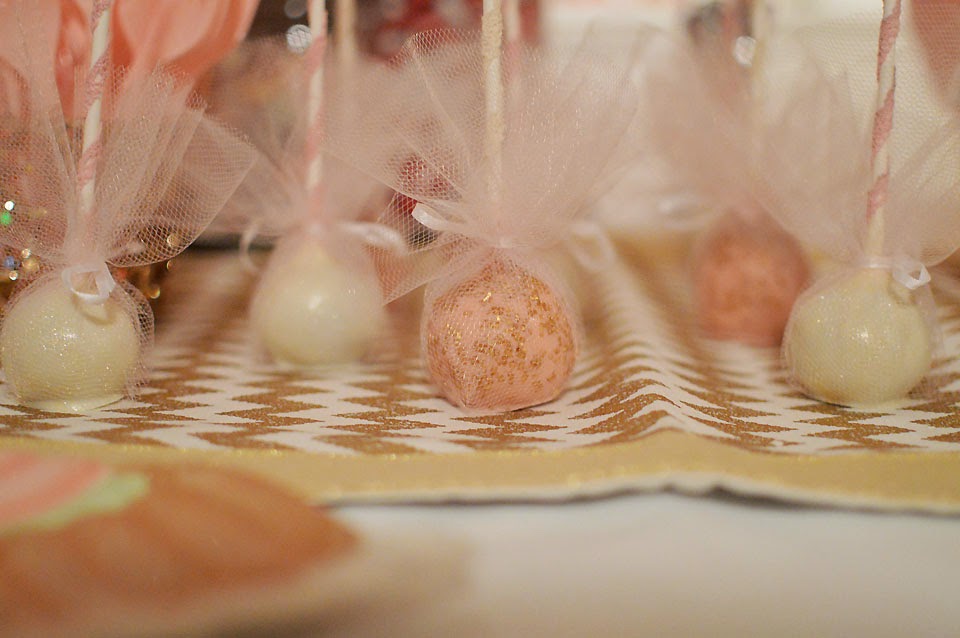 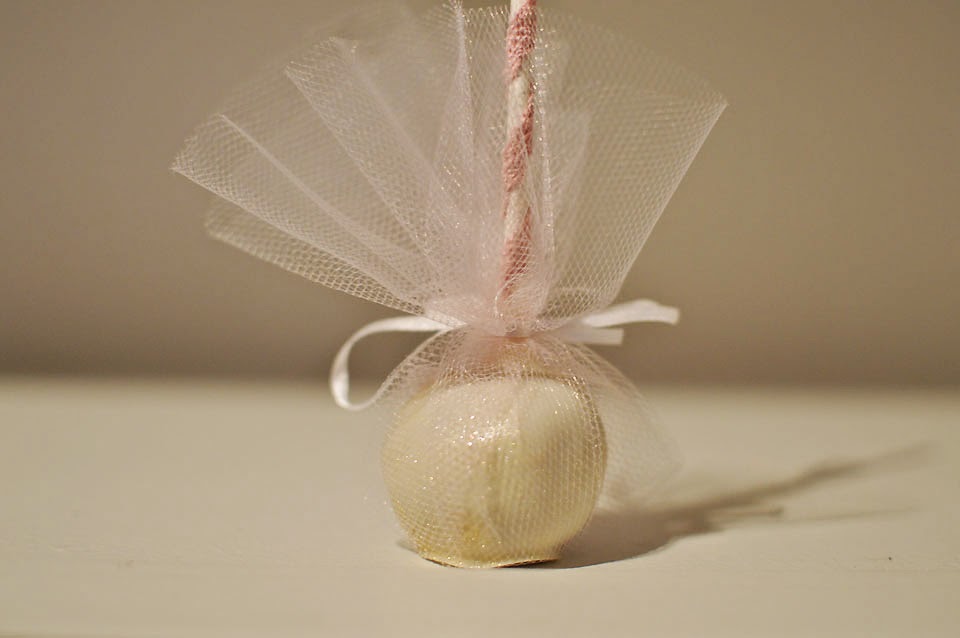 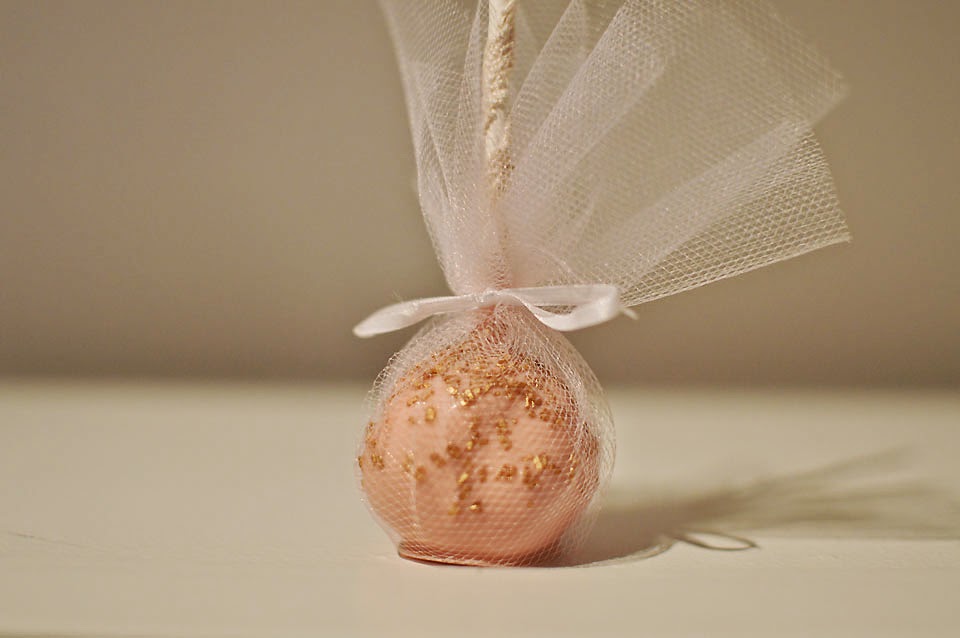 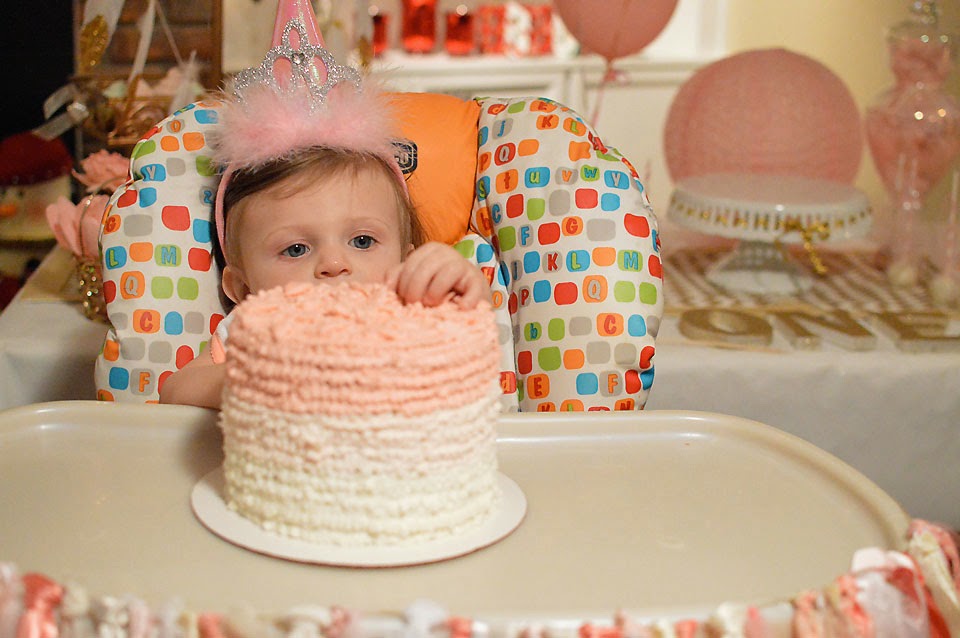 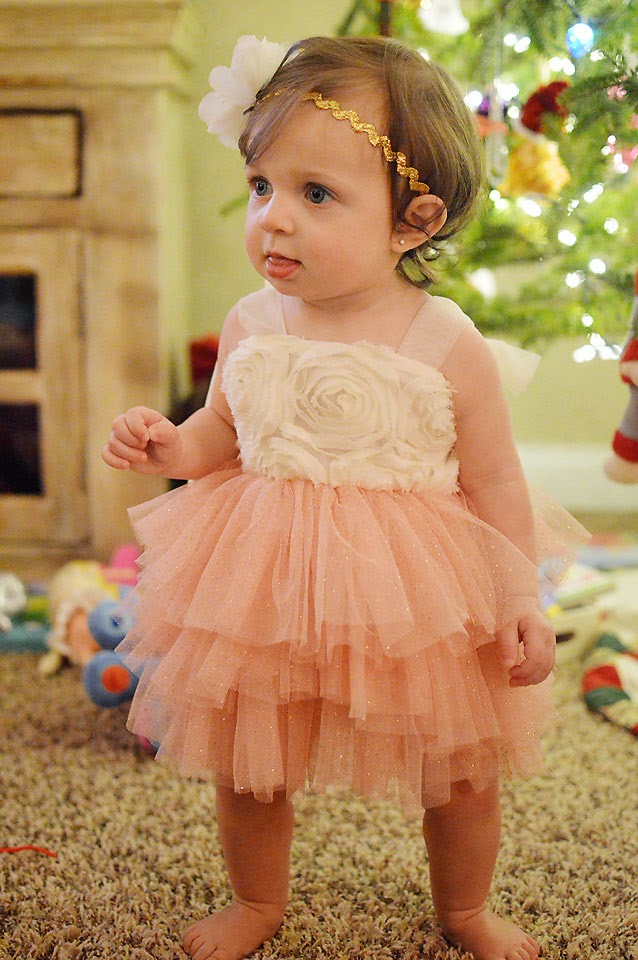 And last but not least… her dress. I found it on Instagram from Chantel & Co. Accessories back in the summer and had to have it. Thank God it fit her because it was perfect! A perfect little girl needs a perfect little birthday dress 🙂
It’s so hard to believe she’s almost one. I feel like it was just yesterday we were awaiting her arrival and celebrating Nolan’s 2nd birthday. And now he is going to be 3 and she’s going to be 1. Someone once told me that time moves so much faster when you have kids and boy are they right. If I seem a little emo the next few days… this is why… my babies need to stop growing up!!
Since we were short on time, I did both of their birthdays on the same night. Nolan chose to have a Spiderman party and I’ll be sharing more on that later this week! 🙂 xoxo 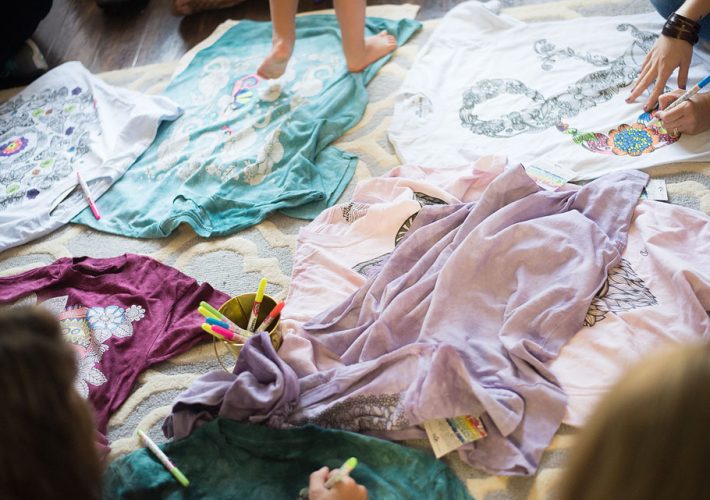 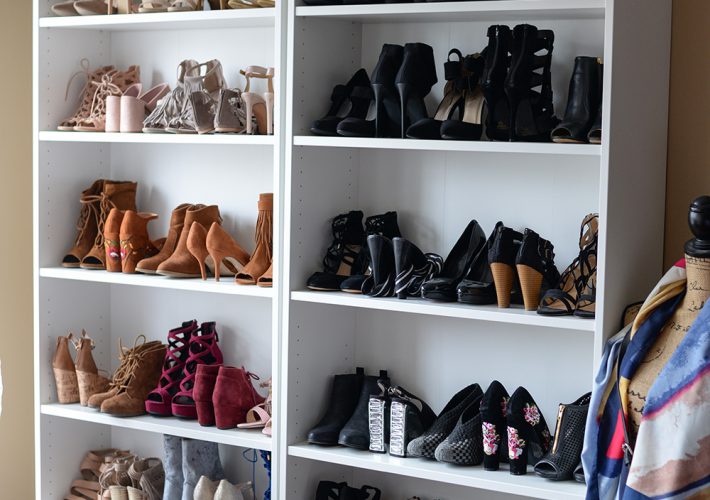