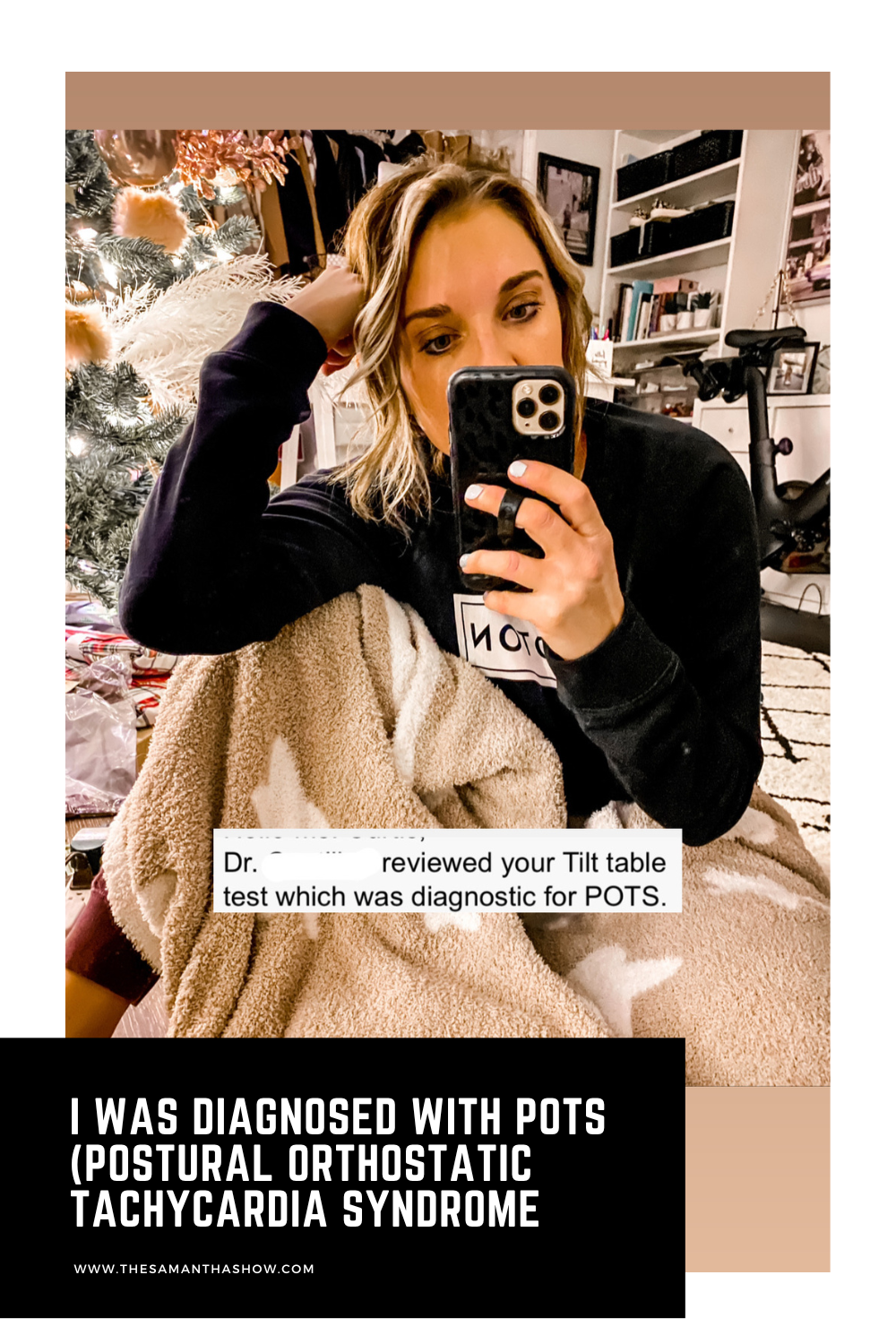 This post has been a long time coming after my diagnosis last year. And although I just got the official diagnosis last year, my symptoms started way before that. Recently, I’ve had so many people reach out to me with questions and similar symptoms to the ones I’ve shared that I’ve experienced. At the time of my unofficial diagnosis, I only knew of one person who had it and since then, I’ve connected with SO many people who also suffer from it. So today I am going to share how I was diagnosed with POTS: Postural Orthostatic Tachycardia Syndrome.

Before I jump into my personal story, let me give you a background on what POTS is. I am SO blessed to live in Cleveland and have the Cleveland Clinic in my backyard so I’m going to share a lot of my information from their site:

“Postural orthostatic tachycardia syndrome (POTS) is a condition that affects blood flow. POTS causes the development of symptoms — usually lightheadedness, fainting and an uncomfortable, rapid increase in heartbeat — that come on when standing up from a reclining position and relieved by sitting or lying back down.” (Source)

If you want to read more about it you can click the article for all of the details. But the best way my cardiologist explained it to me was that my heart is fine, my brain is fine, but they just aren’t communicating correctly and things are getting lost in translation. Which causes a delay in getting blood where it needs to be and because of that, a whole bunch of symptoms can occur. He also gave me this analogy: a person without POTS is driving a car with an automatic transmission. It’s smooth and an easy ride. A person with POTS is driving a car with a manual transmission: it’s often bumpy, there’s a lot of stop and go, and sometimes a delay in moving. Kinda makes sense, doesn’t it?

So how did I figure out this is what I had? Let’s go back to the beginning…

JULY 2020: My journey to discovering what was going on with my body started back in the summer of 2020. I was on a super intense Peloton ride (The Whitney Houston ride to be exact) and towards the end, my heart rate spiked to 210. Which is INSANELY high. Luckily, a family friend was over at the time working on the house and he’s a paramedic. So I called him over and he checked me out, I got off the bike and worked on taking deep breaths until my heart rate returned back to normal. It was one of the craziest things I’ve ever experienced and I immediately scheduled an appointment with my primary care doctor.

When I went in and told her what was going on, she ordered a Holter monitor that I’d wear for 24 hours and that would track all activity with my heart. She also ordered an echocardiogram. They put the Holter monitor on that day and when I returned it the next day, my results indicated that everything was fine. Okay, great news I thought! Since everything was normal, I decided to skip the Echo and if anything else happened, I’d follow up with my doctor.

JANUARY 2021: A few months later, it was becoming challenging for me to take a good deep breath. It felt like I couldn’t breathe and I’d randomly find myself gasping for air. I also woke up out of a dead sleep to what I thought was a panic attack (I had previously been diagnosed with Panic Disorder but I don’t think that’s actually what it was but that’s a story for another day) So I scheduled another appointment with a primary care physician to go over what was happening. When I went in, she had me schedule the Echo that I had previously declined, as well as schedule a Spirometry (breathing test) to see if anything was going on with my lungs.

When the results came back from the Echo, it showed that I had palpitations, an enlarged left ventricle and a leaky tricuspid valve. Apparently this is all SUPER common and the only reason we found it was because we went looking for it. They originally said I had “mild valvular heart disease” and advised an Echo every year. They also referred to me to a cardiologist and I set up an appointment with him. The Spirometry breathing test came back normal as well. They said it was probably my anxiety and that it was getting worse and I needed to get that under control first. But, it didn’t end there… 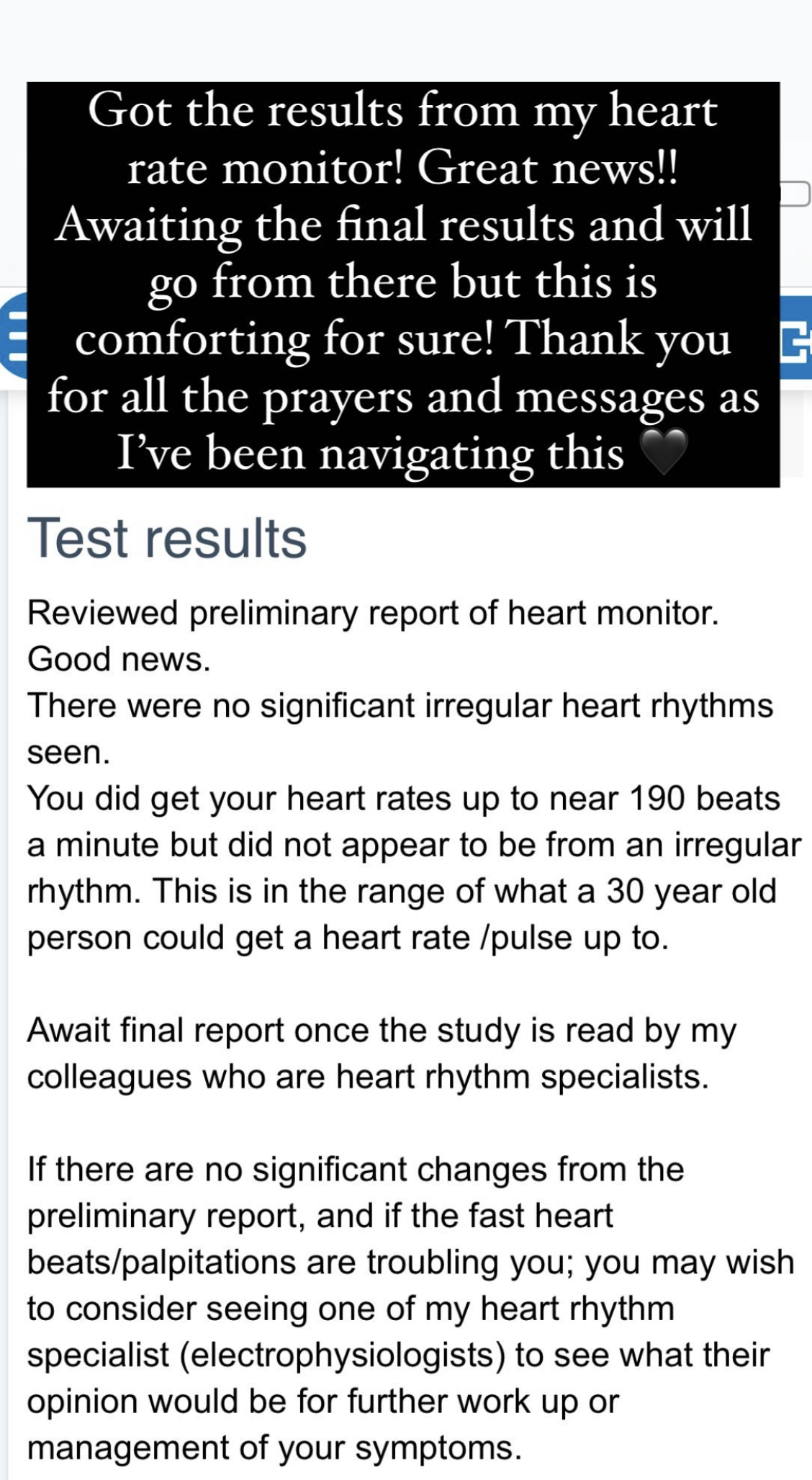 FEBRUARY 2021: My first meeting with my cardiologist, he decided to have me wear a heart rate monitor for two weeks vs. the 24 hour one I did almost a year ago at that point. Those results didn’t show anything significant either. He just advised that I get an Echo every year and we keep an eye on everything to be safe.

MAY 2021: I scheduled an appointment with another primary care physician for continuing anxiety, or so I thought. She suggested changing my medication and possibly adding in a new one, but I didn’t want to do that. So I also reached back out to the cardiologist and he suggested I touch base with an Electrophysiologist (a heart rhythm specialist) and set up an appointment with him. His earliest appointment was in October so I managed the best I could until then.

OCTOBER 2021: I FINALLY met with the Heart Rhythm Specialist and explained everything that was going on. He told me he reviewed the Holter monitor results from February and before even talking with me, thought it was POTS. He asked if I knew what POTS was and I told him actually, yes because I have a friend who has it. He said my results looked like “classic POTS” and he was 90% sure that’s that it was, but would need me to have a Tilt Table Test to confirm it. He suggested managing my symptoms with the Levine Protocol but said to wait until after the test so we’d have an accurate depiction of what was going on. So I scheduled my test for November and anxiously awaited what those results would say.

At that point, I felt a sense of relief. I felt VALIDATION that this wasn’t just anxiety and that something else was really going on. Of course I was terrified and wondered what that would mean for me going forward but I was also relieved that if that’s what it was, I would have a treatment plan and have a team of medical professionals to support me.

NOVEMBER 2021: I got Covid for the first time. It was AWFUL. And because of it, I had to reschedule my Tilt Table Test 28 days from my positive test result. I was super bummed but rescheduled the test and waited for that day to come.

I won’t say it was awful but it wasn’t exactly pleasant. You have an IV, an EKG, a blood pressure cuff and ring in two places, and it’s far from comfortable. During the test I’d let them know how I was feeling and what symptoms I was having. Most of my symptoms were lightheadedness, nausea, dizziness, feeling heavy, and almost vomiting at the end. But I was thankful to have finally taken the test and then, it was a waiting game for the results to come in.

Two days later, I received a message that my results were in and that they indicated I had POTS. After almost 1.5 years of working on getting answers, I finally had a diagnosis. I cried. Partly in relief, partly in validation, partly in fear. But all of these symptoms weren’t in my head. It wasn’t anxiety. It was REAL and I wasn’t just imagining it or making it up or being a hypochondriac.

The Electrophysiologist recommended doing the Levine Protocol for 3 months and then following up with him. The Levine Protocol consists of: increased hydration, increased sodium intake, lower body strength exercises, compression socks, etc. I can’t find a good article with legitimacy but if you Google, you can find a little more about it from various sources. 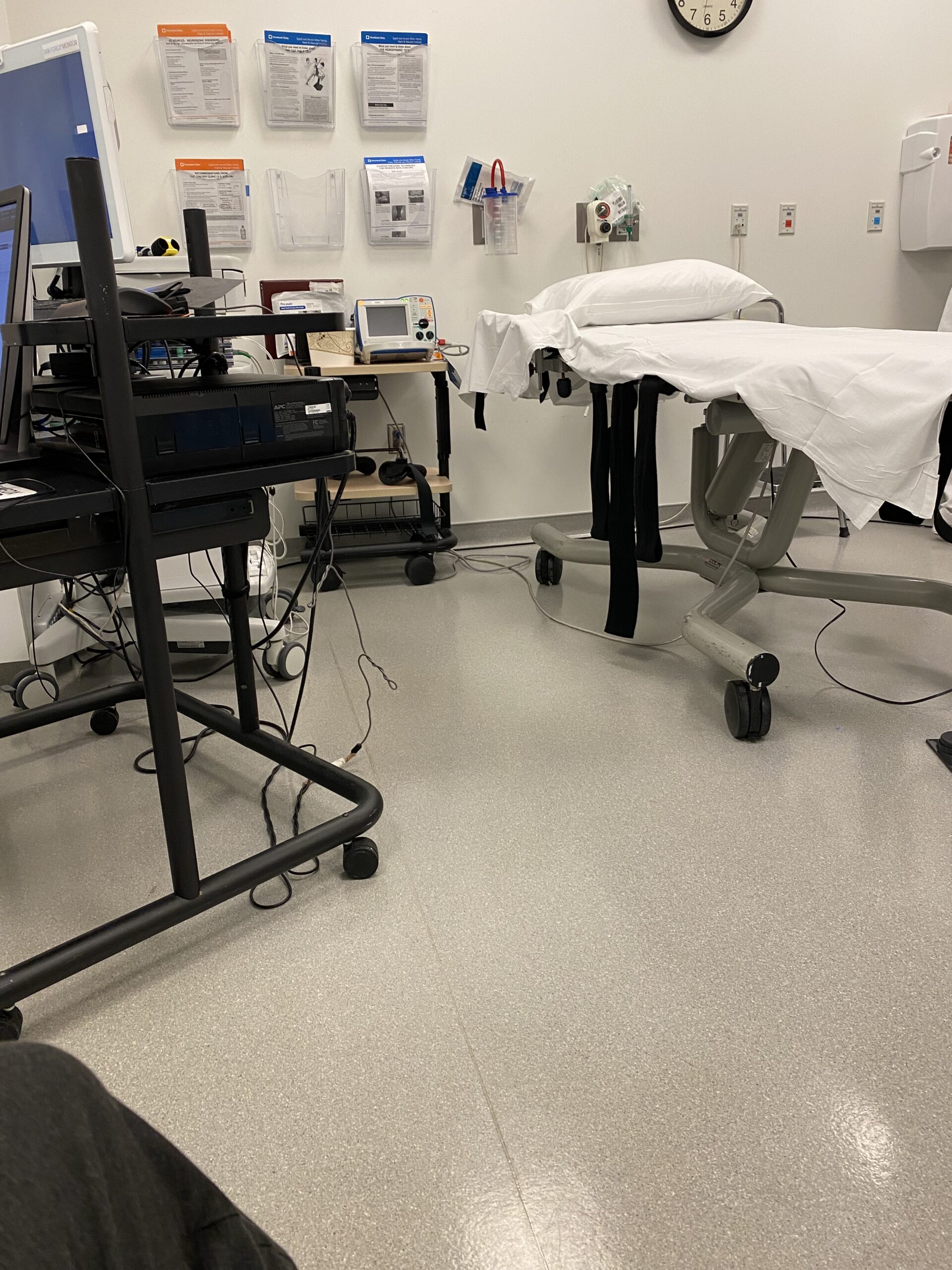 MARCH 2022: I met virtually with my Electrophysiologist and we discussed how the past couple of months had been going. I told him I was feeling better and he commended me on all of the changes I had made and how I was progressing. He said as long as things were going well, we’d just have a check in every year or so. But if things got worse, he could refer me to the Syncope speciality clinic where they only work with POTS patients on a more in depth treatment plan.

JULY 2022: Almost 5 months later, things are still going well. I’ve somewhat recognized my triggers and I’m learning how to manage it better. The heat this summer has been throwing me for a loop and a lack of exercise routine is also something that effects me. So I’ve been making more of an effort to get back into that and stay hydrated as best as I can.

Some of the things I do to manage my symptoms:

Drink 2-3 LMNT drinks a day. These are essentially salt drinks to help with the amount of sodium I need daily.

Rest when I need it.

Lay down when I need to.

Compared to other POTS patients, I consider myself lucky. I know people who pass out constantly, can’t drive, can’t get a job, take a ton of medication, etc. Mine is pretty manageable but I’ve also had to learn it’s okay to tell people that just because I look and act “fine”, that’s not always the case. I recently went on a few trips and realized I was pushing my body too hard to keep up and do things like a “normal” person. It can be exhausting but I have had to learn that while POTS is for the most part, manageable for me, it’s okay to have to step back. And I don’t need to justify it. I have a chronic illness but even with that being the case, it doesn’t define me. I’ve accepted it and learned to live with it.

My biggest lesson in all of this too? BE YOUR OWN ADVOCATE. If I would have just accepted it was anxiety or that everything going on with my heart looked normal, I never would have gotten the diagnosis and in turn, gotten a treatment plan. Follow your gut. You know your body better than anyone.

In addition to the spike in my heart rate, here are some of the other symptoms I experience:

Extreme fatigue (most of the time out of nowhere)

Shakiness ( I feel it in my brain a lot)

I asked on Instagram if anyone had any other questions and here are a few I got:

“What symptoms do you feel that show a flair up coming on?”: For me, it’s like my symptoms are amplified. So I have increased palpitations, increased fatigue, etc. I have noticed that alcohol causes my heart rate to spike, as well as the heat. That’s been a big learning curve this summer.

“Any relation to migraines?” I’ve had headaches all my life and recently started experiencing migraines. I can’t 100% say its due to my POTS but if I had to guess I’d say yes.

If you’re experiencing anything like I was, please make an appointment with your physician. They’re seeing an increased amount of POTS cases due to Covid and while that’s not where I developed mine, it’s definitely becoming more prevalent and more talked about now.

Any other questions? Leave them below! XO