This shop has been compensated by Collective Bias, Inc. and its advertiser. All opinions are mine alone. #ConfidentKids #CollectiveBias

Potty training. As a first time mom, I had NO idea how to potty train my son. Of course there are books and Pinterest and things like that, but every child is different and I wasn’t sure how it would work. So I went about it in a different way and yes, I received some criticism for it.

I bought him a potty on his first birthday. Did he know how to use it? Did I push it? NO! Of course not! But I wanted him to know what it was, what it was used for, and that one day he would go in it. I repeated these things to him almost everyday, because I wanted him to start associating that with going potty.

Around 18 months I actively started to put him on the potty at key times: first thing in the morning, right after a meal, and right after naps. Did he always go potty? No. Sometimes he sat there and the minute I put the diapers or undies on, he went. Of course, right?

At that point I started to put him in big boy undies so he would learn that they were for big boys and he wasn’t to go potty in them. He of course had a few accidents but soon enough, he started running to the potty to avoid an accident. By 2 years and 3 months he was 100% potty trained. I was so proud of him and myself because I had always heard that boys were hard to train.

Fast forward almost a year and a half later and I’ve got a wild three year old toddler. He exhausts himself during the day and sometimes, he passes out before he has a chance to use the bathroom one last time. Sometimes he wakes up before he has to go but sometimes he’s too late. So that’s where a GoodNites TruFit Starter Pack from CVS would be a lifesaver. They’re actual underwear but with a removable absorbent insert. It won’t make your child feel like they’re wearing a diaper and they’ll feel more confident in themselves when they wake up to actual undies. Even if they’ve had an accident.

I never want him to feel embarrassed for having an accident. They’re called accidents for a reason. But even if they’re 100% potty trained, there may still be times when they have setbacks. However if you’re prepared, you may be able to help avoid them.

If you’re out in public, make sure you locate the bathrooms when you get there. This way, you can get there as soon as possible if your child needs to go.

Always bring an extra pair of clothes with you. We leave a change of clothes for both kids in the car so we don’t have to carry them around.

If you’re traveling, make sure you stop frequently to use the restroom. I know, no one likes to stop when they’re on the road. But you won’t get to the point of an accident if you take the time to stop every so often. If you’re traveling soon after potty training, slipping a GoodNites TruFit on may be a good idea.

If you’re on vacation or staying overnight somewhere, try and stick to the same bedtime routine as you normally do. This will keep your child relaxed and comfortable. Sometimes accidents can come from nervousness or excitement and being out of their element may affect how they sleep, and in turn how they get up to use the bathroom.

No matter how well “trained” you think they are, make sure you cut off all liquids at a certain point and have them go to the potty before bed. If they fall asleep before you can have them do that, wake them up and make them go or slip something on them for the night.

My son is 3.5 now and strictly wears big boy undies to bed. We didn’t know about GoodNites TruFit at the time, but I think they would have been a great alternative to Pull-Ups so that he felt like more of a big kid in his real undies. On the off chance that he falls asleep before going to the potty one last time, we can slip one of these on him to avoid any accidents.

How do you help your child stay confident in the potty training process? Did you have any setbacks? Advice for other moms? How would you use a GoodNites Tru Fit Starter Pack in your house?

« How to find the perfect bra. 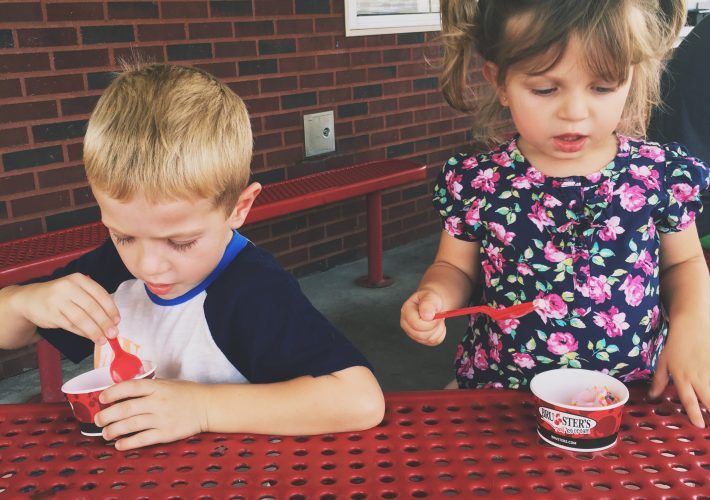